This page contains a list of the greatest Slovak Tennis Players. The pantheon dataset contains 1,148 Tennis Players, 25 of which were born in Slovakia. This makes Slovakia the birth place of the 14th most number of Tennis Players behind Croatia and Ukraine. 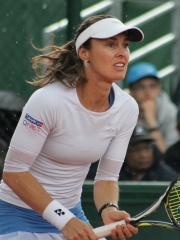 With an HPI of 53.68, Martina Hingis is the most famous Slovak Tennis Player.  Her biography has been translated into 76 different languages on wikipedia.

Martina Hingis (German pronunciation: [marˈtiːna ˈhɪŋɡɪs], Slovak: Martina Hingisová; 30 September 1980) is a Swiss former professional tennis player. Hingis is the first Swiss player, male or female, to win a major title and attain a world No. 1 ranking. She spent a total of 209 weeks as the singles world No. 1 and 90 weeks as doubles world No. 1, holding both No. 1 rankings simultaneously for 29 weeks. She won five major singles titles, 13 major women's doubles titles (including the Grand Slam in 1998), and seven major mixed doubles titles, for a combined total of 25 major titles. In addition, she won the season-ending WTA Finals twice in singles and thrice in doubles, an Olympic silver medal in doubles, and a record 17 Tier I singles titles. Hingis set a series of "youngest-ever" records during the 1990s, including youngest-ever Grand Slam champion and youngest-ever world No. 1. Before ligament injuries in both ankles forced her to withdraw temporarily from professional tennis in early 2003, at the age of 22, she had won 40 singles titles and 36 doubles titles and, according to Forbes, was the highest-paid female athlete in the world for five consecutive years, 1997 to 2001. After several surgeries and long recoveries, Hingis returned to the WTA Tour in 2006, climbing to world No. 6, winning two Tier I tournaments, and receiving the Laureus World Sports Award for Comeback of the Year. She retired in November 2007 after being hampered by a hip injury for several months. In July 2013, Hingis again returned from retirement to play the doubles events of the North American hardcourt season. During her doubles-only comeback, she won four major women's doubles tournaments, six major mixed doubles tournaments (completing the career Grand Slam in mixed doubles), 27 WTA Tour titles, and the silver medal in women's doubles at the 2016 Rio Olympics. Hingis retired for the third and final time after the 2017 WTA Finals, while ranked as the world No. 1.Widely considered an all-time tennis great, Hingis was ranked by Tennis magazine in 2005 as the eighth-greatest female player of the preceding 40 years. She was named one of the "30 Legends of Women's Tennis: Past, Present and Future" by TIME in June 2011. In 2013, Hingis was elected into the International Tennis Hall of Fame, and was appointed two years later the organization's first ever Global Ambassador. 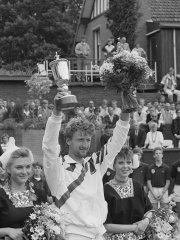 With an HPI of 49.30, Miloslav Mečíř is the 2nd most famous Slovak Tennis Player.  His biography has been translated into 24 different languages. 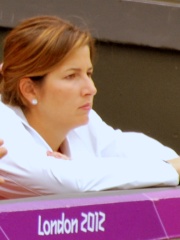 With an HPI of 45.81, Mirka Federer is the 3rd most famous Slovak Tennis Player.  Her biography has been translated into 26 different languages.

Miroslava "Mirka" Federer (born Miroslava Vavrincová on 1 April 1978, later Miroslava Vavrinec) is a Swiss former professional tennis player. She is married to tennis player Roger Federer, having first met him at the 2000 Summer Olympics. She retired from professional tennis in 2002 due to a persistent foot injury. By the time she closed her career, she was a top-100 ranked player. 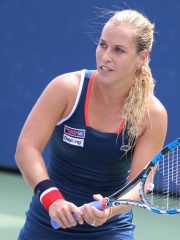 With an HPI of 41.41, Dominika Cibulková is the 4th most famous Slovak Tennis Player.  Her biography has been translated into 45 different languages.

Dominika Cibulková (Slovak pronunciation: [ˈdɔminika ˈtsibulkɔʋaː]; born 6 May 1989) is a Slovak former professional tennis player. She is the 2016 WTA Finals champion, becoming the fourth player (after Serena Williams in 2001, Maria Sharapova in 2004 and Petra Kvitová in 2011) to win the tournament on her debut. She won eight WTA Tour singles titles and two on the ITF Circuit. Cibulková reached the quarterfinals or better of all four Grand Slam tournaments at least once. One of her most notable achievements was a final appearance at the 2014 Australian Open. Although she lost to Li Na, she was the first female Slovak to reach the final of a Grand Slam tournament. 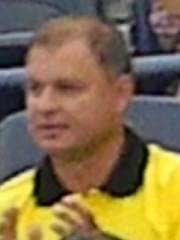 With an HPI of 38.30, Marián Vajda is the 5th most famous Slovak Tennis Player.  His biography has been translated into 16 different languages.

Marián Vajda (Slovak pronunciation: [ˈmarijaːɱ ˈʋajda]; born 24 March 1965) is a Slovak professional tennis coach and former player. He is the former head coach of Novak Djokovic, coaching Djokovic almost his entire professional career, winning 85 titles together (out of the 90 won by Djokovic, the only 5 being 2017 Eastbourne, 2022 Rome, the 2022 Wimbledon, 2022 Tel Aviv, and 2022 Astana titles). Vajda is the most successful coach in the history of tennis in terms of Grand Slam titles winning 20 Grand Slam trophies with Novak Djokovic. 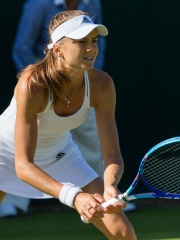 With an HPI of 37.93, Daniela Hantuchová is the 6th most famous Slovak Tennis Player.  Her biography has been translated into 43 different languages.

Daniela Hantuchová (Slovak pronunciation: [ˈdaɲɪela ˈɦantuxɔʋaː]; born 23 April 1983) is a Slovak tennis commentator and retired player. She turned professional in 1999 and had her breakthrough year in 2002, when she won her first WTA Tour title at the Indian Wells Masters, defeating Martina Hingis in the final and becoming the lowest-ranked player to ever win the tournament. She also reached the quarterfinals of that year's Wimbledon Championships and US Open, ending the year in the top ten. She was part of the Slovak team that won the 2002 Fed Cup and the 2005 Hopman Cup. Hantuchová reached her highest ranking of world No. 5 in January 2003, after playing the quarterfinals of the Australian Open. She has won seven WTA tournaments, including the Indian Wells Masters for a second time in 2007, with the 2015 Thailand Open being her last victory. She reached the semifinals of the 2008 Australian Open, her best result in a Grand Slam tournament. Her biggest career wins include victories over defending champion Serena Williams in the third round of the 2006 Australian Open and world No. 1 Caroline Wozniacki in the third round of the 2011 French Open. Hantuchová became the 37th woman in the Open Era to reach 500 career wins when she beat Laura Robson in the second round of the 2013 Aegon Classic on her way to the title.She is also an accomplished doubles player, achieving a career-high doubles ranking of world No. 5. In 2005, she completed the Career Grand Slam in mixed doubles, becoming only the fifth female tennis player to do so. She won the mixed doubles at Wimbledon in 2001 with Leoš Friedl, at the Australian Open in 2002 with Kevin Ullyett, at the French Open in 2005 with Fabrice Santoro and at the US Open in 2005 with Mahesh Bhupathi. She has also reached the finals of the mixed doubles at Wimbledon in 2002 with Ullyett and the finals of the women's doubles at the Australian Open in 2002 with Arantxa Sánchez Vicario, at the French Open in 2006 with Ai Sugiyama and at the Australian Open in 2009 with Sugiyama. Hantuchová announced her retirement from professional tennis on 6 July 2017. Since then, she has been a tennis commentator and pundit, covering big tournament events as the US Open and Wimbledon for Amazon Prime, as well as serving as a commentator for Fox Sports. Hantuchová has also produced a web series for Tennis Channel and is hosting a podcast about sports and entertainment. 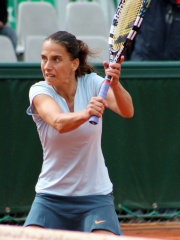 With an HPI of 36.68, Janette Husárová is the 7th most famous Slovak Tennis Player.  Her biography has been translated into 25 different languages.

Janette Husárová (Slovak pronunciation: [ˈɦusaːrɔʋaː]; born 4 June 1974) is a retired Slovak tennis player. On 13 January 2003, she reached her best singles ranking of world No. 31. On 21 April 2003, she peaked at No. 3 in the doubles rankings. She won the WTA Tour Championships women's doubles title in 2002, partnering with Elena Dementieva. With Dementieva, she reached the final of US Open doubles competition in the same year, losing to Virginia Ruano Pascual and Paola Suárez. Playing for Slovakia in the Fed Cup, Husárová has a win–loss record of 17–12. Together with Daniela Hantuchová, she was a member of the Slovak team winning the Fed Cup in 2002. In her career, Husárová won 25 doubles titles on the WTA Tour, including the season-ending WTA Championships and three Tier I tournaments (Berlin, Moscow (2002) and Tokyo (2005)), as well as four singles and 16 doubles titles on the ITF Circuit. In February 2016, Husárová announced her retirement from professional tennis. 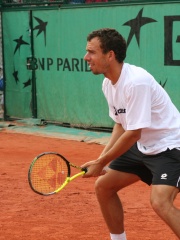 With an HPI of 35.47, Dominik Hrbatý is the 8th most famous Slovak Tennis Player.  His biography has been translated into 26 different languages.

Dominik Hrbatý (Slovak pronunciation: [ˈdɔminiɡ ˈɦr̩batiː]; born 4 January 1978) is a Slovakian former professional tennis player. Hrbatý reached the semifinals of the 1999 French Open, and achieved a career-high singles ranking of world No. 12 in October 2005. Hrbatý is one of only three players, alongside Nick Kyrgios and Lleyton Hewitt, to have beaten each member of the Big Three (Novak Djokovic, Roger Federer, and Rafael Nadal) the first time he played each of them.Hrbatý is one of a select few players to have competed on the ATP Tour with a positive winning record against Federer (2–1), Nadal (3–1), Murray (1–0), and Berdych (1–0 in ATP-level matches, or 2–0 overall). Hrbatý's record against Djokovic stands at 1–1 (or 0–1 at tour-level events). Hrbaty, Alex Corretja and Novak Djokovic are the only players to have a winning record over Roger Federer and Rafael Nadal. 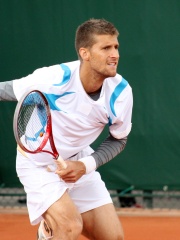 With an HPI of 34.17, Martin Kližan is the 9th most famous Slovak Tennis Player.  His biography has been translated into 27 different languages.

With an HPI of 33.43, Karol Kučera is the 10th most famous Slovak Tennis Player.  His biography has been translated into 19 different languages.

Karol Kučera (born 4 March 1974) is a retired ATP professional male tennis player from Slovakia. He achieved a career-high singles ranking of World No. 6 in September 1998, reaching the semi-finals of the Australian Open the same year. In 2020, Kučera was elected an MP of the National Council of Slovakia representing the Ordinary People and Independent Personalities movement along with a fellow former tennis player Ján Krošlák and Romana Tabak.

Pantheon has 25 people classified as tennis players born between 1964 and 1998. Of these 25, 25 (100.00%) of them are still alive today. The most famous living tennis players include Martina Hingis, Miloslav Mečíř, and Mirka Federer. As of April 2022, 2 new tennis players have been added to Pantheon including Norbert Gombos and Viktória Kužmová.