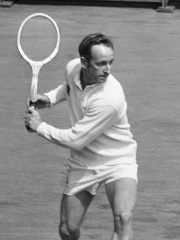 With an HPI of 72.57, Rod Laver is the most famous Australian Tennis Player.  His biography has been translated into 50 different languages on wikipedia.

Rodney George Laver (born 9 August 1938) is an Australian former tennis player. Laver was ranked world No. 1 in nine different years, which is an all-time record in tennis. He was the No. 1 ranked professional from 1964 to 1970, spanning four years before and three years after the start of the Open Era in 1968. He also was the No. 1 ranked amateur in 1961–62.Laver's 198 singles titles are the most in tennis history. This included his all-time men's record of 10 or more titles per year for seven consecutive years (1964–70). He excelled on all of the court surfaces of his time: grass, clay, hard, carpet, and wood. Laver won 11 Grand Slam singles titles, though he was banned from playing those tournaments for the five years prior to the Open Era. Laver is the only player, male or female, to twice achieve a Grand Slam in singles, in 1962 and 1969, and the latter remains the only time a man has done so in the Open Era. He is second of three male players to win each major title twice (preceded by Roy Emerson and followed by Novak Djokovic). Laver also won eight Pro Slam titles, including the "pro Grand Slam" in 1967, and he contributed to five Davis Cup titles for Australia during an age when the Davis Cup was deemed as significant as the four majors.The Laver Cup tournament and the Rod Laver Arena are named after him. 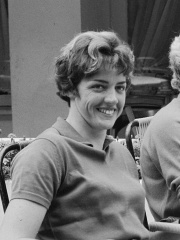 With an HPI of 68.47, Margaret Court is the 2nd most famous Australian Tennis Player.  Her biography has been translated into 49 different languages.

Margaret Court (née Smith; born 16 July 1942), also known as Margaret Smith Court, is an Australian retired tennis player and former world No. 1. She won 24 Grand Slam women's singles titles in her career, 19 Grand Slam doubles titles, and 21 Grand Slam mixed doubles titles. She has won more Grand Slam titles than any other player in history, and is considered one of the greatest tennis players of all time. She is currently a Christian minister in Perth, Western Australia. In 1970, Court became the first woman during the Open Era (the second woman in history after Maureen Connolly) to win the singles Grand Slam (all four major tournaments in the same calendar year). She won 24 Grand Slam singles titles in total (11 in the Open Era), which is the all-time record. She also won 19 women's doubles and 21 mixed doubles titles, giving her a record 64 Grand Slam titles overall. Her all-surfaces (hard, clay, grass and carpet) singles career-winning percentage of 91.74 is the best of all time according to the Sporteology website. Her Open era singles career winning percentage of 91.37% (593–56) is unequalled, as is her Open era winning percentage of 91.7% (11–1) in Grand Slam finals. Her win-loss performance in all Grand Slam singles tournaments was 90.12% (210–23). She was 95.31% (61–3) at the Australian Open, 90.38% (47–5) at the French Open, 85.10% (51–9) at Wimbledon and 89.47% (51–6) at the US Open. She also shares the Open era record for most Grand Slam singles titles as a mother with Kim Clijsters. In 1973, Court set the record for most titles won in a single Grand Slam event, with 11 Australian Open wins. This record was surpassed by Rafael Nadal in 2019 when he won his 12th French Open title, but remains a women's record. Court is one of only three players in history (all women) to have won the "Grand Slam Boxed Set", consisting of every Grand Slam title (the singles, doubles and mixed doubles). Court, however, is the only one in tennis history to complete a Multiple Grand Slam set, twice, in all three disciplines: singles, women's doubles and mixed doubles. Uniquely, she won all 12 as an amateur and then after a period of retirement, returned as a professional to win all 12 again. Court is also one of only six tennis players ever to win a Multiple Grand Slam set in two disciplines, matching Roy Emerson, Martina Navratilova, Frank Sedgman, Doris Hart and Serena Williams. The International Tennis Hall of Fame states: "For sheer strength of performance and accomplishment there has never been a tennis player to match (her)." In 2010, the Herald Sun called her the greatest female tennis player of all time, a view supported by Evonne Goolagong Cawley.Having grown up as a Roman Catholic, Court became associated with Pentecostalism in the 1970s and became a Christian minister in that tradition in 1991. She later founded Margaret Court Ministries. 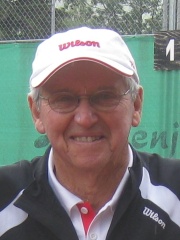 With an HPI of 67.21, Roy Emerson is the 3rd most famous Australian Tennis Player.  His biography has been translated into 35 different languages.

Roy Stanley Emerson (born 3 November 1936) is an Australian former tennis player who won 12 Grand Slam singles titles and 16 Grand Slam doubles titles, for a total of 28 Grand Slam titles. He is the only male player to have completed a career Grand Slam (winning titles at all four Grand Slam events) in both singles and doubles, and the first of three male players to complete a double career Grand Slam in singles (later followed by Rod Laver and Novak Djokovic). His 28 major titles are the all-time record for a male player. In 1964, 1965, and 1967 he was ranked world No. 1. Emerson was the first male player to win 12 singles majors. He held that record for 30 years until it was passed by Pete Sampras in 2000. He also held the record of six Australian Open men's singles titles until 2019 when Novak Djokovic won his seventh title. Emerson won five of those titles consecutively (1963–67), a still-standing record. Emerson is one of only five tennis players ever to win multiple slam sets in two disciplines. Emerson was a member of a record eight Davis Cup winning teams between 1959 and 1967. Unlike several of his contemporaries he chose to remain an amateur player and did not turn pro during the pre-Open Era. 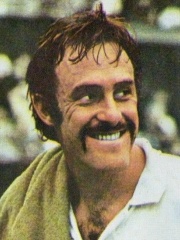 With an HPI of 65.69, John Newcombe is the 4th most famous Australian Tennis Player.  His biography has been translated into 39 different languages.

John David Newcombe AO OBE (born 23 May 1944) is an Australian former professional tennis player. He is one of the few men to have attained a world No. 1 ranking in both singles and doubles. At the majors, he won seven singles titles and a former record 17 men's doubles titles. He also contributed to five Davis Cup titles for Australia during an age when the Davis Cup was deemed as significant as the majors. Tennis magazine rated him the 10th best male player of the period 1965–2005. 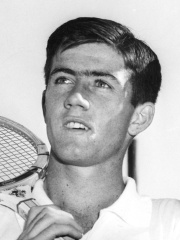 With an HPI of 65.48, Ken Rosewall is the 5th most famous Australian Tennis Player.  His biography has been translated into 34 different languages.

Kenneth Robert Rosewall (born 2 November 1934) is a former world top-ranking amateur and professional tennis player from Australia. He won a record 23 tennis Majors, including 8 Grand Slam singles titles and, before the Open Era, a record 15 Pro Slam titles; overall, he reached a record 35 Major finals. He won the Pro Grand Slam in 1963. Rosewall won 9 slams in doubles with a career doubles grand slam. He had a renowned backhand and enjoyed a long career at the highest levels from the early 1950s to the early 1970s.Rosewall was ranked the world No. 1 tennis player in eight different years in contemporary rankings. Rosewall was world No. 1 player for a number of years in the early 1960s in some rankings. Rosewall was first ranked in the top 20 in 1952 and last ranked in the top 20 in 1977. Rosewall is the only player to have simultaneously held Pro Grand Slam titles on three different surfaces (1962–1963). At the 1971 Australian Open he became the first male player during the open era to win a Grand Slam tournament without dropping a set. Rosewall won world professional championship tours in 1963, 1964, and the WCT titles in 1971 and 1972.A natural left-hander, he was taught by his father to play right-handed. He developed a powerful and effective backhand but never had anything more than an accurate but relatively soft serve. He was 1.70 m (5 ft 7 in) tall, weighed 67 kg (148 lb) and was ironically nicknamed "Muscles" by his fellow-players because of his lack of them. He was, however, fast, agile, and tireless, with a deadly volley. The father of two and grandfather of five, Rosewall now lives in northern Sydney. 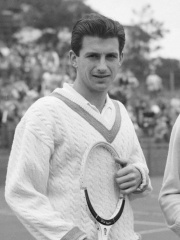 With an HPI of 61.93, Ashley Cooper is the 6th most famous Australian Tennis Player.  His biography has been translated into 20 different languages.

Ashley John Cooper AO (15 September 1936 – 22 May 2020) was an Australian tennis player who played between 1953 and 1968. He was recognised as the world's best amateur player during the years of 1957 and 1958. Cooper won four singles and four doubles titles at Grand Slam tournaments. He won three of the four Grand Slam events in 1958. He turned professional in 1959. 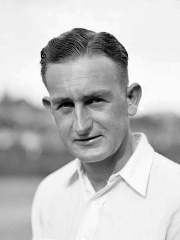 With an HPI of 61.04, Jack Crawford is the 7th most famous Australian Tennis Player.  His biography has been translated into 17 different languages. 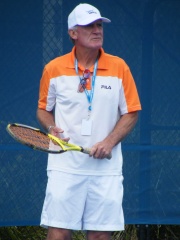 With an HPI of 59.61, Tony Roche is the 8th most famous Australian Tennis Player.  His biography has been translated into 21 different languages. 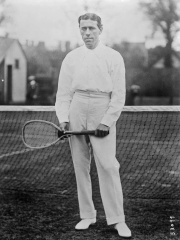 With an HPI of 59.27, Norman Brookes is the 9th most famous Australian Tennis Player.  His biography has been translated into 18 different languages.

Sir Norman Everard Brookes (14 November 1877 – 28 September 1968) was an Australian tennis player. During his career he won three Grand Slam singles titles; Wimbledon in 1907 and 1914 (the first non-British individual to do so) and the Australasian Championships in 1911. Brookes was part of the Australasian Davis Cup team that won the title on six occasions. The Australian Open men's singles trophy, the Norman Brookes Challenge Cup, is named in his honour. After his active playing career Brookes became president of the Lawn Tennis Association of Australia. 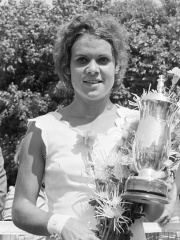 With an HPI of 58.54, Evonne Goolagong Cawley is the 10th most famous Australian Tennis Player.  Her biography has been translated into 41 different languages.

Evonne Fay Goolagong Cawley (née Goolagong; born 31 July 1951) is an Australian retired professional tennis player. Goolagong was one of the world's leading players in the 1970s and early 1980s and is a former world No. 1. At the age of 19, Goolagong won the French Open singles and the Australian Open doubles championships (the latter with Margaret Court). She won the ladies' singles tournament at Wimbledon in 1971. In 1980, she became the first mother to win Wimbledon in 66 years. Goolagong went on to win 14 Grand Slam tournament titles: seven in singles (four at the Australian Open, two at Wimbledon and one at the French Open), six in women's doubles, and one in mixed doubles. She represented Australia in three Fed Cup competitions, winning the title in 1971, 1973 and 1974, and was Fed Cup captain for three consecutive years. After retiring from professional tennis in 1983, Goolagong played in senior invitational competitions, endorsed a variety of products, worked as a touring professional, and held sports-related leadership roles. Goolagong was named Australian of the Year in 1971. She was appointed as a Member of the Order of the British Empire in 1972 and as an Officer of the Order of Australia in 1982. Goolagong was inducted into the Sport Australia Hall of Fame in 1985 and the International Tennis Hall of Fame in 1988. She leads the Goolagong National Development Camp for Indigenous boys and girls, which encourages Indigenous youth to stay in school.

Which Tennis Players were alive at the same time? This visualization shows the lifespans of the 13 most globally memorable Tennis Players since 1700.