This page contains a list of the greatest Slovak Soccer Players. The pantheon dataset contains 16,880 Soccer Players, 107 of which were born in Slovakia. This makes Slovakia the birth place of the 35th most number of Soccer Players behind Paraguay and Bosnia and Herzegovina.

With an HPI of 56.01, Ferdinand Daučík is the most famous Slovak Soccer Player.  His biography has been translated into 24 different languages on wikipedia. 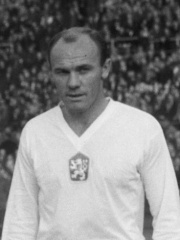 With an HPI of 55.07, Ján Popluhár is the 2nd most famous Slovak Soccer Player.  His biography has been translated into 28 different languages.

Ján Popluhár (12 September 1935 – 6 March 2011) was a Slovak footballer who primarily played as a sweeper for Slovak club ŠK Slovan Bratislava. At international level, he was also a member of the Czechoslovakia national team, playing in two World Cups (1958 and 1962). 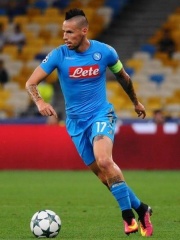 With an HPI of 52.29, Marek Hamšík is the 3rd most famous Slovak Soccer Player.  His biography has been translated into 58 different languages.

Marek Hamšík (Slovak pronunciation: [ˈmareɡ ˈɦamʂiːk]; born 27 July 1987) is a Slovak professional footballer who plays as a midfielder for Süper Lig club Trabzonspor. He formerly captained the Slovakia national team. After beginning his club career with Slovan Bratislava in 2004, Hamšík moved to Italian club Brescia later that year. In 2007, he was purchased by newly promoted Serie A club Napoli, where he became a mainstay in the squad's starting line-up. His energy, leadership, creativity, skill and eye for goal from midfield saw him play a key role in helping the team to two Coppa Italia titles, a Supercoppa Italiana, UEFA Champions League qualification and the 2014–15 UEFA Europa League semi-finals. He scored 121 goals for the club and collected 521 appearances in all competitions during his 12 seasons with the team, and also served as the club's captain between 2014 and 2019; he became the club's all-time top goalscorer in 2017 (surpassed by Dries Mertens in 2020), and the club's all-time appearance holder in 2018. In February 2019, he joined Chinese club Dalian Professional. At international level, Hamšík helped Slovakia qualify for the country' first ever FIFA World Cup, captaining the side at the 2010 tournament as they reached the round of 16 following a victory over defending champions Italy. He would go on to lead his nation to European Championship qualification for the first time in 2016, as they once again reached the second round of a major tournament; a second consecutive European Championship appearance would follow for Hamšík in 2020. From 2007 to 2022, Hamšík collected 136 international caps at senior level, scoring 26 goals, and in 2018 became Slovakia's most capped player ever. In 2019, he scored his 25th international goal, overtaking Róbert Vittek as the nation's all-time top scorer. For his performances, Hamšík has also won several individual awards: he is an eight-time winner of the Slovak Footballer of the Year Award, and he was named Serie A Young Footballer of the Year in 2008. In 2011, 2016 and 2017, he was named to the Serie A Team of the Year, and in 2015, he was included in the UEFA Europa League Squad of the season. In 2013, Hamšík was ranked as the eighth best footballer in Europe by Bloomberg. 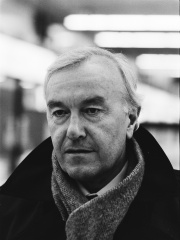 With an HPI of 52.16, Václav Ježek is the 4th most famous Slovak Soccer Player.  His biography has been translated into 20 different languages.

Václav Ježek (1 October 1923, Zvolen – 27 August 1995, Prague) was the coach of the Czechoslovakia national football team when they won the 1976 European Championships. 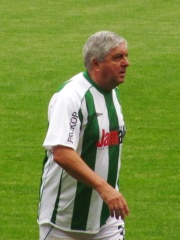 With an HPI of 52.14, Karol Dobiaš is the 5th most famous Slovak Soccer Player.  His biography has been translated into 29 different languages.

Karol Dobiaš (born 18 December 1947) is a former Slovak football player and coach. During his career, he was a versatile player, mostly playing as defender or midfielder.

With an HPI of 51.82, Pavol Molnár is the 6th most famous Slovak Soccer Player.  His biography has been translated into 18 different languages.

Pavol Molnár (13 February 1936 – 6 November 2021) was a Slovak footballer who played as a forward. He played for Czechoslovakia national team in 20 matches and scored three goals. He was a participant at the 1958 FIFA World Cup, where he played in three matches, and at the 1962 FIFA World Cup, where his team won the silver medal. Molnár played for SK Slovan Bratislava and later CH Bratislava. 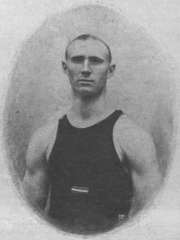 With an HPI of 51.76, Zoltán Halmay is the 7th most famous Slovak Soccer Player.  His biography has been translated into 20 different languages.

Zoltán Imre Ödön Halmay de Erdőtelek (Hungarian pronunciation: [ˈzoltaːn ˈhɒlmɒi]; 18 June 1881, Magasfalu – 20 May 1956, Budapest) was a Hungarian Olympic swimmer. He competed in four Olympics (1900 – 1908), winning the following medals: 1900: silver (200 m, 4000 m freestyle), bronze (1000 m freestyle) 1904: gold (50yd, 100yd freestyle) 1906: gold (4×250 m freestyle relay), silver (100 m freestyle) (these games are now not officially recognized by the IOC) 1908: silver (100 m freestyle; 4 × 200 m freestyle relay)Zoltán Halmay, who was a two-time Olympic champion, was the most successful sportsman in freestyle swimming. In 1904 he won the 50 and 100 yards at the St. Louis Games and in 1906 he was a member of the 4×250 m relay team that won the gold medal at the Intercalated Games. He won a further 4 silver medals and a bronze medal at other Olympics. He was Hungarian champion 14 times and won the English, the German and the Austrian Championships as well. He was a world record holder at 100 metres and also at 50 and 220 yards. His versatility is shown by the fact that he was also a remarkable athlete, rower and football player, and he also won a national-level championship in roller-skating over 5000 metres. After his retirement, he worked as a trainer, and he was the federal chief trainer of the Hungarian Swimming Association. At the ceremony organised at the main square of the village, a monument unifying the memorial plaque and the statue of Halmay was set up in collaboration with the Slovak Olympic Committee and the local government of Vysoká pri Morave (Magasfalu).

With an HPI of 51.71, Anton Ondruš is the 8th most famous Slovak Soccer Player.  His biography has been translated into 28 different languages.

Anton Ondruš (born 27 March 1950 in Solčany, Czechoslovakia) is a former Slovak football player and considered one of the best defenders of the seventies.

With an HPI of 51.56, Dušan Uhrin is the 9th most famous Slovak Soccer Player.  His biography has been translated into 19 different languages.

Dušan Uhrin (born 5 February 1943) is a Czech and Slovak football coach and former player. He was the coach of Slovan Bratislava. Although he was born in the Nitra District in the Slovak part of Czechoslovakia, he has lived in Prague since the age of 16. He coached the Czech Republic national football team at the 1996 UEFA European Championship, where the Czech Republic were runners up. He also coached Kuwait between 1999 and 2002. At club level Uhrin coached Czech clubs Sparta Prague, FC Hradec Králové, Rudá hvězda Cheb, Bohemians and Teplice, as well as Al-Nasr (Saudi Arabia), AIK (Sweden), AEL Limassol and APOEL FC (Cyprus), Maccabi Haifa FC (Israel).

With an HPI of 50.38, Andrej Kvašňák is the 10th most famous Slovak Soccer Player.  His biography has been translated into 21 different languages.

Andrej Kvašňák (19 May 1936 – 18 April 2007) was a Slovak football player. Born in Košice, he played for Czechoslovakia, for which he played 47 matches and scored 13 goals. He is usually considered one of the best Czechoslovak footballers. He was a participant in the 1962 FIFA World Cup, where Czechoslovakia finished second, and also in the 1970 FIFA World Cup. In his country he played mostly for Sparta Prague. From September 1969 he played a few seasons for Racing Mechelen, a Belgian team. Although often listed as a forward, he was in fact normally an attacking midfield schemer, forging a partnership in the centre of the park with Josef Masopust at international level. Well known for his technique and passing ability, he was also a prolific goalscorer and fine header of the ball.

Which Soccer Players were alive at the same time? This visualization shows the lifespans of the 19 most globally memorable Soccer Players since 1700.