This page contains a list of the greatest Romanian Tennis Players. The pantheon dataset contains 1,148 Tennis Players, 23 of which were born in Romania. This makes Romania the birth place of the 17th most number of Tennis Players behind Netherlands and Japan. 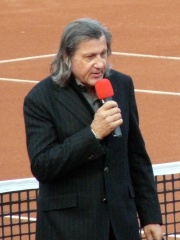 With an HPI of 62.27, Ilie Năstase is the most famous Romanian Tennis Player.  His biography has been translated into 45 different languages on wikipedia.

Ilie Theodoriu Năstase (Romanian pronunciation: [iˈli.e nəsˈtase] (listen), born 19 July 1946) is a former World No. 1 Romanian tennis player. He was ranked world No. 1 in singles from 23 August 1973 to 2 June 1974, and was the first man to hold the top position on the computerized ATP rankings. Năstase is one of the 10 players in history who have won over 100 total ATP titles, with 64 in singles and 45 in doubles.Năstase won seven major titles: two in singles, three in men's doubles and two in mixed doubles. He also won four Masters Grand Prix year-end championship titles and seven Grand Prix Super Series titles (1970–73), the precursors to the current Masters 1000. He was the first professional sports figure to sign an endorsement contract with Nike, doing so in 1972. Năstase wrote several novels in French in the 1980s, and was inducted into the International Tennis Hall of Fame in 1991. 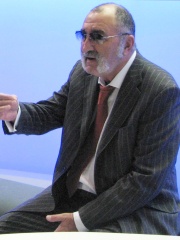 With an HPI of 58.91, Ion Țiriac is the 2nd most famous Romanian Tennis Player.  His biography has been translated into 20 different languages.

Ion Țiriac (Romanian pronunciation: [iˈon t͡siriˈak]; born 9 May 1939), also known as the "Brașov Bulldozer", is a Romanian businessman and former professional tennis and ice hockey player. He has been president of the Romanian Tennis Federation.A former singles top 10 player on the ATP Tour, Tiriac was the winner of one grand slam title, the 1970 French Open in men's doubles. Țiriac was the first man to play against a woman and defeat her, in a sanctioned tennis tournament (against Abigail Maynard, in 1975). The highlight of his ice hockey career was participating as defenseman in the Romanian national team at the 1964 Winter Olympics. After retirement, Tiriac became active as a tennis coach, advisor and player agent in the 1980s, taking under his wing Ilie Năstase, Manuel Orantes, Adriano Panatta, Guillermo Vilas, Henri Leconte and the young Boris Becker. Later, Țiriac developed the Mutua Madrid Open ATP masters tennis tournament, which he owns. In 2013, he was elected as contributor into the International Tennis Hall of Fame. He has been managing French tennis player Lucas Pouille since December 2016. As a tennis player, Tiriac played dramatic five-setters against Rod Laver, Stan Smith, Jan Kodeš and Manuel Orantes. His singles record includes wins over Arthur Ashe, Stan Smith, Roscoe Tanner, Manuel Orantes, Andrés Gimeno, Adriano Panatta and Niki Pilić. He played three Davis Cup finals (in 1969, 1971 and 1972).As of April 2022, Forbes ranked him as the third-richest person in Romania with a net worth of $1.6 billion. 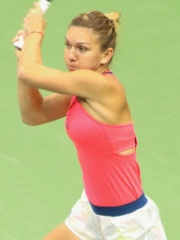 With an HPI of 44.41, Simona Halep is the 3rd most famous Romanian Tennis Player.  Her biography has been translated into 58 different languages.

Simona Halep (Romanian pronunciation: [siˈmona haˈlep]; born 27 September 1991) is a Romanian professional tennis player. She has been ranked world No. 1 in singles twice between 2017 and 2019, for a total of 64 weeks, which ranks eleventh in the history of the Women's Tennis Association (WTA) rankings. Halep was the year-end No. 1 in 2017 and 2018. She has won two Grand Slam singles titles: the 2018 French Open and the 2019 Wimbledon Championships. From 27 January 2014 to 8 August 2021, Halep was ranked in the top 10 for 373 consecutive weeks, the eighth-longest streak in WTA history. During this seven-year span, she finished each year ranked no lower than No. 4. She has won 24 WTA Tour singles titles and finished runner-up 18 times. A French Open junior champion and former junior world No. 1, Halep first broke into the world's top 50 at the end of 2011, the top 20 in August 2013, and the top 10 in January 2014. She won her first six WTA titles in the same calendar year in 2013, and was the first to do so since Steffi Graf in 1986. This led to her being named the WTA Most Improved Player of the year. Halep reached three major finals at the 2014 French Open, 2017 French Open, and 2018 Australian Open before winning her first major title at the 2018 French Open over Sloane Stephens. Halep also finished runner-up at the 2014 WTA Finals to Serena Williams, despite thrashing Williams in the round-robin stage. She did not defeat Williams a second time until the final of the 2019 Wimbledon Championships. Halep was named the WTA Most Popular Player of the Year in 2014 and 2015, as well as the WTA Fan Favorite Singles Player of the Year in 2017, 2018, and 2019. She is a recipient of the Patriarchal Cross of Romania and the Order of the Star of Romania, and was named an honorary citizen of Bucharest. She is the third Romanian to reach the top 10 of the WTA rankings after Virginia Ruzici and Irina Spîrlea, and the second Romanian woman to win a major singles title after Ruzici. She is also the first Romanian woman to be ranked world No. 1 and the first Romanian to win a Wimbledon singles title. Halep is regarded as one of the best returners on the WTA Tour, while also building her game around being aggressive and being able to hit winners from defensive positions. 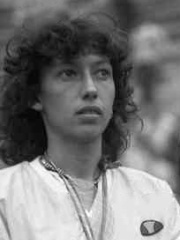 With an HPI of 39.89, Virginia Ruzici is the 4th most famous Romanian Tennis Player.  Her biography has been translated into 25 different languages. 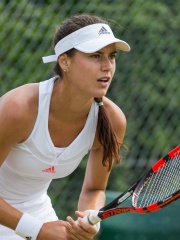 With an HPI of 39.58, Sorana Cîrstea is the 5th most famous Romanian Tennis Player.  Her biography has been translated into 31 different languages.

Sorana Mihaela Cîrstea (Romanian pronunciation: [soˈrana ˈkɨrste̯a]; born 7 April 1990) is a Romanian professional tennis player. In singles, she achieved a career-high ranking of world No. 21 on 12 August 2013. In doubles, her career-high ranking is No. 35, which she reached on 9 March 2009. Her biggest achievements include reaching the quarterfinals at the 2009 French Open and the final at the 2013 Rogers Cup. 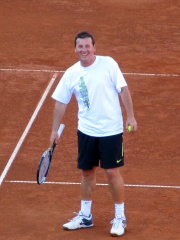 With an HPI of 37.87, Andrei Pavel is the 6th most famous Romanian Tennis Player.  His biography has been translated into 27 different languages. 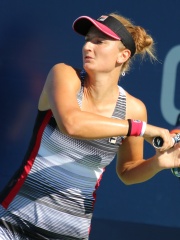 With an HPI of 34.46, Irina-Camelia Begu is the 7th most famous Romanian Tennis Player.  Her biography has been translated into 29 different languages.

Irina-Camelia Begu (born 26 August 1990) is a Romanian professional tennis player. She reached a career-high singles ranking of No. 22 in the world, in August 2016. Two years later, she reached her highest WTA doubles ranking, also No. 22. Begu has won five singles titles and nine doubles titles on the WTA Tour. She also has won two singles titles on the WTA Challenger Tour, as well as 12 singles and 19 doubles titles on the ITF Circuit. As a junior, she reached semifinal at the 2007 Wimbledon Championships, partnering with Oksana Kalashnikova. Later, as a senior, she continued with Grand Slam doubles success. She reached the semifinal at the 2018 Australian Open and quarterfinals of the 2017 French Open and 2018 Wimbledon Championships. In singles, she has the round of 16 as her best Grand Slam result at the 2015 Australian Open, 2016 French Open and 2022 French Open. In singles, she reached one Premier final, at the 2014 Kremlin Cup, but lost to Anastasia Pavlyuchenkova. Her other significant results in singles include two quarterfinals of the Premier Mandatory-level Madrid Open in 2015 and 2016 and semifinal of the Premier 5 Italian Open in 2016. In doubles, she has never won higher level tournament than International, but reached the final of the Premier-5 Wuhan Open in 2015, as well as, two Premier-level finals at the Kremlin Cup in 2015 and Eastbourne International in 2018. 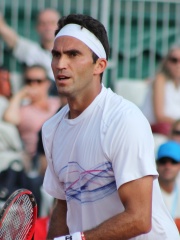 With an HPI of 34.31, Horia Tecău is the 8th most famous Romanian Tennis Player.  His biography has been translated into 26 different languages.

Horia Tecău (Romanian pronunciation: [ˈhori.a teˈkəw]; born January 19, 1985) is a Romanian former professional tennis player who specialised in doubles. He is a three-time Grand Slam champion, having won the 2015 Wimbledon Championships and 2017 US Open alongside Jean-Julien Rojer in men's doubles, as well as the 2012 Australian Open with Bethanie Mattek-Sands in mixed doubles. Tecău also reached five further Grand Slam finals: at the 2010, 2011 and 2012 Wimbledon Championships with Robert Lindstedt in men's doubles, and at the 2014 and 2016 Australian Opens in mixed doubles. He reached his career-high doubles ranking of world No. 2 in November 2015, shortly before winning the 2015 ATP Finals with Rojer. Tecău won 38 doubles and one mixed doubles titles on the ATP Tour, including three at Masters 1000 level. He also won the silver medal at the 2016 Olympic Games in Rio de Janeiro, alongside compatriot Florin Mergea. 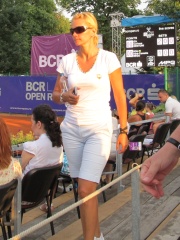 With an HPI of 33.43, Ruxandra Dragomir is the 9th most famous Romanian Tennis Player.  Her biography has been translated into 19 different languages.

Ruxandra Dragomir Ilie (born 24 October 1972) is a retired tennis player from Romania. She won four singles and five doubles titles on the WTA Tour during her career. The right-hander reached her highest individual WTA ranking on 25 August 1997, when she became the No. 15 of the world. Between 2009 and 2013 she was the president of Romanian Tennis Federation. Her best performance at a Grand Slam tournament came when she got to the quarterfinals of the 1997 French Open, defeating Sonya Jeyaseelan, Yayuk Basuki, Karina Habšudová and Nicole Arendt before losing to the eventual champion, Iva Majoli. Dragomir retired from professional tennis in 2005. 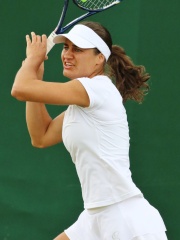 With an HPI of 33.13, Monica Niculescu is the 10th most famous Romanian Tennis Player.  Her biography has been translated into 30 different languages.

Monica Niculescu (born 25 September 1987) is a Romanian professional tennis player. She has been ranked by the Women's Tennis Association as high as 28 in singles and 11 in doubles. Niculescu has won several titles: three singles and ten doubles titles on the WTA Tour, one singles and one doubles title at WTA 125 tournaments, as well as 19 singles and 22 doubles titles on the ITF Women's Circuit. She has ranked within the top 30 for several years in singles. Niculescu entered the Grand Slam doubles final at Wimbledon 2017 tournament, together with Chan Hao-ching. She reached the quarterfinals in doubles in all Grand Slam championships. In WTA 1000 tournaments, she got into three finals (doubles), six semifinals (5 in doubles), and 12 quarterfinals (11 in doubles). In singles, her best Grand Slam performance is reaching round four, which she did at the 2011 US Open and 2015 Wimbledon Championships.

Pantheon has 23 people classified as tennis players born between 1939 and 1994. Of these 23, 23 (100.00%) of them are still alive today. The most famous living tennis players include Ilie Năstase, Ion Țiriac, and Simona Halep.