This page contains a list of the greatest Romanian Soccer Players. The pantheon dataset contains 16,923 Soccer Players, 123 of which were born in Romania. This makes Romania the birth place of the 26th most number of Soccer Players behind Colombia and South Korea. 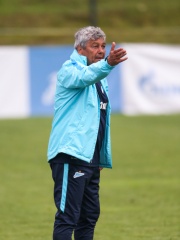 With an HPI of 73.16, Mircea Lucescu is the most famous Romanian Soccer Player.  His biography has been translated into 33 different languages on wikipedia.

Mircea Lucescu (Romanian pronunciation: [ˈmirt͡ʃe̯a luˈt͡ʃesku]; born 29 July 1945) is a Romanian professional football manager and former player, who is currently in charge of Ukrainian Premier League club Dynamo Kyiv. He is one of the most decorated managers of all time.He is one of the most famous and successful players who has ever played in the Romanian First League. He won 7 championships as a player, all with Dinamo București, and is tied with Giedrius Arlauskis, Ciprian Deac, Adrian Bumbescu, Dumitru Stângaciu and Tudorel Stoica in an all time ranking. Marius Lăcătuș won it 10 times and is ranked 1st. He also had spells at Știința București and Corvinul Hunedoara. Internationally, he made 70 appearances for the Romania national team, captaining the nation at the 1970 FIFA World Cup.Lucescu has coached various sides in Romania, Italy, Turkey, Ukraine and Russia. He is well known for his twelve-year stint in charge of Shakhtar Donetsk, where he became the most successful coach in the team's history by winning eight Ukrainian Premier League titles, six Ukrainian Cups, seven Ukrainian Super Cups and the 2008–09 UEFA Cup. He also won trophies in Ukraine with rival Dynamo Kyiv, as well as Romanian league championships with Dinamo București and Rapid București, and Turkish Süper Lig titles with Galatasaray and Beşiktaş.Lucescu was named Romania Coach of the Year in 2004, 2010, 2012, 2014 and 2021, and Ukraine Coach of the Year in 2006 and between 2008 and 2014. In 2013, he was awarded the Manager of the Decade award in Romania, and in 2015 became the fifth person to coach in 100 UEFA Champions League matches, joining the likes of Alex Ferguson, Carlo Ancelotti, Arsène Wenger and José Mourinho. He is also ranked second behind Ferguson in terms of official trophies won, with 38. 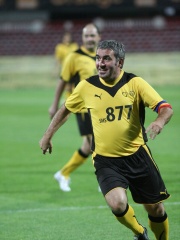 With an HPI of 71.10, Gheorghe Hagi is the 2nd most famous Romanian Soccer Player.  His biography has been translated into 61 different languages.

Gheorghe Hagi (Romanian pronunciation: [ˈɡe̯orɡe ˈhad͡ʒʲ] (listen); born 5 February 1965) is a Romanian professional football manager and former player, who is currently the owner and manager of Liga I club Farul Constanța. Deployed as an attacking midfielder, Hagi was considered one of the best players in the world during the 1980s and '90s, and is regarded by many as the greatest Romanian footballer of all time. Fans of Turkish club Galatasaray, with whom Hagi ended his career, called him "Comandante" ("The Commander"), while he was known as "Regele" ("The King") to Romanian supporters. Nicknamed "The Maradona of the Carpathians", he was a creative advanced playmaker renowned for his dribbling, technique, vision, passing and shooting.After starting his playing career in Romania, with Farul Constanța, and subsequently featuring for Sportul Studențesc and Steaua București, he later also had spells in Spain with Real Madrid and FC Barcelona, Italy with Brescia, and Turkey, with Galatasaray; as such, Hagi is one of the few footballers to have played for both Spanish rival clubs Real Madrid and Barcelona. Throughout his club career, he won numerous titles while playing in four different countries: he won three Romanian League titles, two Cupa României titles, and the European Super Cup with Steaua București – also reaching the final of the 1988–89 European Cup –, a Supercopa de España title with Real Madrid, the Anglo-Italian Cup with Brescia, another Supercopa de España title with Barcelona, and four Süper Lig titles, two Turkish Cups, two Turkish Super Cups, the UEFA Cup, and the UEFA Super Cup with Galatasaray. At international level, Hagi played for the Romanian national team in three FIFA World Cups, in 1990, 1994 (where he was named in the World Cup All-Star Team after helping his nation to the quarter-finals of the tournament) and 1998; as well as in three UEFA European Championships, in 1984, 1996 and 2000. He won a total of 124 caps for Romania between 1983 and 2000, making him the second-most capped Romanian player of all time, behind only Dorinel Munteanu; he is also the joint all-time leading goalscorer of the Romanian national side (alongside Adrian Mutu) with 35 goals. Hagi is considered a hero both in his homeland and in Turkey. He was named Romanian Footballer of the Year a record seven times, and is regarded as one of the best football players of his generation. Hagi was nominated six times for the Ballon d'Or, his best performance being a 4th place in 1994. In November 2003, to celebrate UEFA's Jubilee, Hagi was selected as the Golden Player of Romania by the Romanian Football Federation as their most outstanding player of the past 50 years. In 2004, he was named by Pelé as one of the 125 Greatest Living Footballers at a FIFA Awards Ceremony. In 1999, he was ranked at number 25 in World Soccer Magazine's list of the 100 greatest players of the 20th century.Following his retirement in 2001, Hagi pursued a managerial career, coaching the Romanian national team, as well as clubs in both Romania and Turkey, namely Bursaspor, Galatasaray, Politehnica Timișoara, Steaua București, Viitorul Constanța and Farul Constanța. In 2009, he founded Romanian club Viitorul Constanța, which he has coached between 2014 and 2020. Hagi also established his namesake football academy, one of the largest ones in Southeastern Europe. 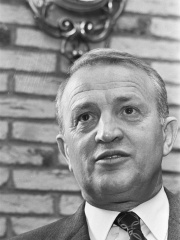 With an HPI of 70.75, Ștefan Kovács is the 3rd most famous Romanian Soccer Player.  His biography has been translated into 25 different languages.

Ștefan Kovács (Romanian: Ştefan Covaci; Hungarian: Kovács István; 2 October 1920 – 12 May 1995) was a Romanian football player and coach. By winning 15 major titles he is one of the most successful association football coaches in the history of the game. In 2019, France Football ranked him at No. 43 on their list of the Top 50 football managers of all time. 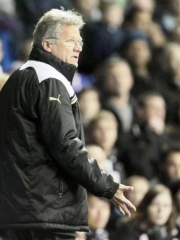 With an HPI of 66.60, László Bölöni is the 4th most famous Romanian Soccer Player.  His biography has been translated into 26 different languages.

László Bölöni (Romanian: Ladislau Bölöni; born 11 March 1953) is a Romanian professional football manager and former player. He was last in charge of Super League Greece side Panathinaikos. After starting out at ASA Târgu Mureș, Bölöni became an integral part of the Steaua București team that won the European Cup in 1986, making it the only Romanian team—and one of two Eastern European sides—to have achieved the honour. He was twice named Romanian Footballer of the Year and took part in 484 Divizia A games, the fourth-most appearances in the history of the competition. Internationally, Bölöni earned 102 caps with the national team, which ranks him fifth in the nation's all-time list, and scored 23 goals, the sixth highest all-time mark. He is thus considered one of the best Romanian footballers in history. Following his retirement as a player he went on to coach clubs in France, Portugal, the Arabian Peninsula, Belgium and Greece. Bölöni was also at the helm of the Romania national team between 2000 and 2001. In terms of trophies won, his most successful stints were at Sporting CP and Standard Liège with three domestic honours each. 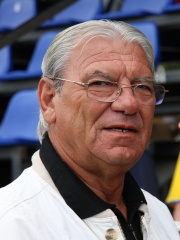 With an HPI of 66.12, Emerich Jenei is the 5th most famous Romanian Soccer Player.  His biography has been translated into 24 different languages.

Emerich Jenei or Imre Jenei (also known as Emeric Jenei or Ienei; 22 March 1937) is a Romanian former football player and coach of Hungarian ethnicity. He is considered one of Romania's best Managers, alongside Ştefan Kovács, Mircea Lucescu, and Anghel Iordănescu. On 25 March 2008, he was decorated by the president of Romania, Traian Băsescu with Ordinul "Meritul Sportiv" – (The Order "The Sportive Merit") class II with one barret for his part in winning the 1986 European Cup Final. He is the 2nd most successful Manager in Romania, tied with Dan Petrescu, winning the Romanian First League on 6 occasions, all with Steaua București. First is ranked Nicolae Dumitru, who has won 7 championships, all with Dinamo București . 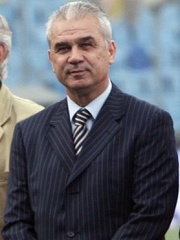 With an HPI of 65.93, Anghel Iordănescu is the 6th most famous Romanian Soccer Player.  His biography has been translated into 30 different languages.

Anghel Iordănescu (Romanian pronunciation: [ˈaŋɡel jordəˈnesku]; born 4 May 1950), also known as "Tata Puiu", is a Romanian former footballer and former manager of the Romania national team, who played as a forward. In 2007, Iordănescu retired from football, and the following February, after his predecessor resigned, he became a member of the Romanian Senate, sitting on the Social Democratic Party benches. On 26 December 2011, he became an independent senator, affiliated to the National Union for the Progress of Romania. His son, Edward Iordănescu, is also a former footballer and current manager. 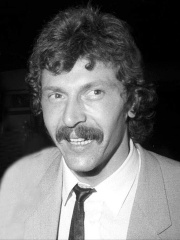 With an HPI of 64.38, Helmuth Duckadam is the 7th most famous Romanian Soccer Player.  His biography has been translated into 25 different languages.

Helmut Robert Duckadam (Romanian pronunciation: [helˈmut dukaˈdam]; born 1 April 1959) is a Romanian retired footballer who played as a goalkeeper. He was dubbed "the Hero of Seville" due to his performance in the 1986 European Cup Final, won by his club Steaua București, where he saved all four penalties against Barcelona in the penalty shootout, for the first time in football history. He represented three other teams in a 14-year senior career. Duckadam regularly appears as a studio guest on Digi Sport's "Fotbal Club" programme. 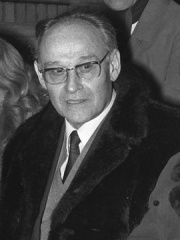 With an HPI of 64.09, Elek Schwartz is the 8th most famous Romanian Soccer Player.  His biography has been translated into 17 different languages.

Alexandru "Elek" Schwartz (23 October 1908 – 2 October 2000) was a Romanian professional footballer and coach of the Netherlands national team. With S.L. Benfica he won the national Championship and Cup trophies of 1965 and led the club into the final of the European Champion Clubs' Cup. 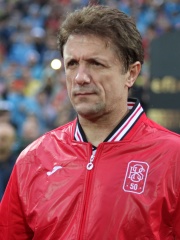 With an HPI of 63.40, Gheorghe Popescu is the 9th most famous Romanian Soccer Player.  His biography has been translated into 33 different languages.

Gheorghe "Gică" Popescu (Romanian pronunciation: [ˈɡe̯orɡe ˈd͡ʒikə poˈpesku]; born 9 October 1967) is a Romanian former professional football who played as a defender. He notably played in La Liga where he is a former captain of FC Barcelona. He played for a string of European clubs in that period, including a four-year stint at PSV Eindhoven and winning the UEFA Cup with Galatasaray. He also played in the Premier League with Tottenham Hotspur, in Serie A with Lecce and in the Bundesliga with Hannover 96. In his native country he played for Universitatea Craiova, Steaua București and Dinamo București. Beside from his defending skills, he was also capable starting attacks His tactical knowledge as a defender made him a valuable team member in top European competitions until he reached his late-thirties. He was a key part of the Romania national team in the 1990s and earned 115 caps, scoring 16 goals. He was present at 1990 World Cup, 1994 World Cup, Euro 1996, 1998 World Cup and Euro 2000. He is the brother-in-law of fellow Romanian international Gheorghe Hagi. 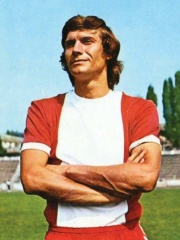 With an HPI of 63.29, Dudu Georgescu is the 10th most famous Romanian Soccer Player.  His biography has been translated into 24 different languages.

Dudu Georgescu (born 1 September 1950) is a retired Romanian footballer who played as a forward and a former coach.