This page contains a list of the greatest Ukrainian Tennis Players. The pantheon dataset contains 1,148 Tennis Players, 27 of which were born in Ukraine. This makes Ukraine the birth place of the 11th most number of Tennis Players behind Argentina and Italy. 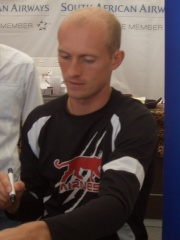 With an HPI of 57.53, Nikolay Davydenko is the most famous Ukrainian Tennis Player.  His biography has been translated into 43 different languages on wikipedia.

Nikolay Vladimirovich Davydenko (Russian: Никола́й Влади́мирович Давыде́нко listen ; born 2 June 1981) is a Ukrainian-born Russian former professional tennis player. He achieved a career-high singles ranking of World No. 3 in November 2006. Davydenko's best result in a Grand Slam tournament was reaching the semi-finals, which he accomplished on four occasions: twice each at the French Open and the U.S. Open, losing to Roger Federer in all but one of them. His biggest achievement was winning the 2009 ATP World Tour Finals, and he also won three ATP Masters Series. In mid-October 2014 Davydenko retired from competitions. 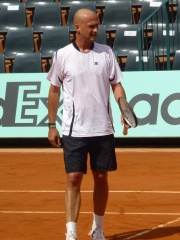 With an HPI of 56.17, Andriy Medvedev is the 2nd most famous Ukrainian Tennis Player.  His biography has been translated into 22 different languages.

Andrei Medvedev (Ukrainian: Андрій Медведєв, romanized: Andriy Medvedyev; born 31 August 1974) is a former professional tennis player from the Ukraine. He reached the final of the French Open in 1999, the French Open semifinals in 1993 and won four Masters titles during his career, achieving a career-high ranking of four in May 1994. 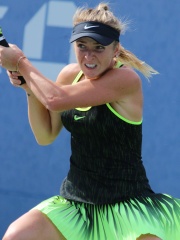 With an HPI of 54.02, Elina Svitolina is the 3rd most famous Ukrainian Tennis Player.  Her biography has been translated into 39 different languages.

Elina Mykhailivna Svitolina (Ukrainian: Еліна Михайлівна Світоліна, pronounced [eˈl⁽ʲ⁾inɐ s⁽ʲ⁾wiˈtɔl⁽ʲ⁾inɐ]; born 12 September 1994) is a Ukrainian professional tennis player. She reached her career-high ranking in singles of world No. 3 on 11 September 2017 and in doubles of world No. 108 on 4 May 2015. Since she has been ranked inside the top 10 beginning in May 2017, Svitolina owns the longest streak of consecutive weeks among players currently within the top echelon. Svitolina has won 16 Women's Tennis Association (WTA) singles titles and has finished runner-up three times. Svitolina first broke into the world's top 50 in July 2013, reached the top 20 in June 2015, and then the top 10 in May 2017, making her the first Ukrainian woman to reach the top 10 in rankings after surpassing compatriot Alona Bondarenko. After winning her first WTA title in 2013, she won five additional titles until 2017, during which she won five titles that same year, propelling her into the top 10. Among her titles include the 2018 WTA Finals and three of five Premier 5-level tournaments: the Dubai Tennis Championships, the Italian Open, and the Canadian Open. She has also won two titles in doubles, both at the İstanbul Cup in 2014 and 2015. Svitolina has reached two Grand Slam semifinals at the 2019 Wimbledon Championships and the 2019 US Open, but has not yet won a Grand Slam singles title. In 2021, Svitolina won the Olympic bronze medal in the women's singles tournament at the 2020 Summer Olympics and became the first Olympian to win a medal in tennis for Ukraine.

With an HPI of 53.96, Larisa Neiland is the 4th most famous Ukrainian Tennis Player.  Her biography has been translated into 21 different languages. 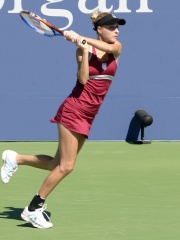 With an HPI of 52.06, Alona Bondarenko is the 5th most famous Ukrainian Tennis Player.  Her biography has been translated into 31 different languages.

Alona Volodymyrivna Bondarenko Dyachok (Ukrainian: Альона Володимирівна Бондаренко, born 13 August 1984) is a Ukrainian former tennis player. Her younger sister Kateryna Bondarenko also plays on the WTA Tour. Her career-high singles ranking is No. 19, achieved on 14 April 2008. She defeated former world No. 1 Jelena Janković in the third round of the 2010 Australian Open, and won the 2008 Australian Open women's doubles tournament with her sister Kateryna, beating Victoria Azarenka and Shahar Pe'er in the finals. She also formerly paired with her older sister Valeria in doubles. 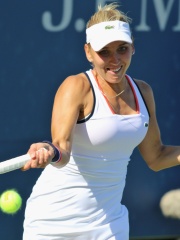 With an HPI of 51.43, Elena Vesnina is the 6th most famous Ukrainian Tennis Player.  Her biography has been translated into 41 different languages.

Elena Sergeyevna Vesnina (born 1 August 1986) is a Russian professional tennis player. She is a four-time Grand Slam champion in doubles competition, having won the 2013 French Open, 2014 US Open, and 2017 Wimbledon tournaments with Ekaterina Makarova, and the 2016 Australian Open mixed-doubles title with Bruno Soares. In June 2018, Vesnina was number one in women's doubles. Her career-high singles ranking is 13, achieved in March 2017. Vesnina debuted in the main draw of a WTA tournament at Quebec City. One of her best seasons was in 2009, reaching her first WTA final and attaining a ranking of 24 in the year end. She repeated her success in 2013, reaching her best for a long period ranking of 21 on 22 July. Then she won her first WTA titles in Hobart and Eastbourne. After falling out of the top 100 in October 2014, Vesnina experienced an upturn in fortunes in 2016, making her first Grand Slam semifinal at Wimbledon. She continued her good form into 2017 and won the biggest singles title of her career to date at Indian Wells, claiming her first Premier Mandatory level title. Vesnina has been consistently one of the highest ranked doubles players during her career, ending every season since 2008 ranked within the top 30, and every season since 2011 in the top ten. In May 2012, she entered a regular partnership with Ekaterina Makarova, becoming one of the leading teams on tour. They won twelve titles together, including three Grand Slam titles, the 2016 WTA Finals, as well as Olympic gold at Rio. At the 2020 Summer Olympics, she won the silver medal with Aslan Karatsev in mixed doubles. 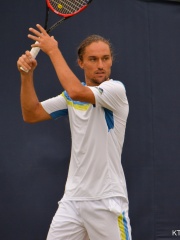 With an HPI of 51.02, Alexandr Dolgopolov is the 7th most famous Ukrainian Tennis Player.  His biography has been translated into 28 different languages.

Alexandr Oleksandrovych Dolgopolov (born 7 November 1988), formerly known as Oleksandr Dolgopolov Jr., is a Ukrainian retired professional tennis player. He changed his forename spelling to the current form in May 2010. Dolgopolov reached the quarterfinals of the 2011 Australian Open and achieved a career-high singles ranking of World No. 13 in January 2012. 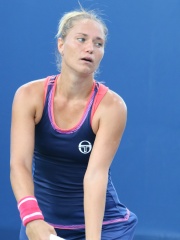 With an HPI of 50.70, Kateryna Bondarenko is the 8th most famous Ukrainian Tennis Player.  Her biography has been translated into 33 different languages.

Kateryna Volodymyrivna Bondarenko (Ukrainian: Катерина Володимирівна Бондаренко; born 8 August 1986) is a tennis player from Ukraine. She was the doubles champion in 2008 at the Australian Open, partnering her sister Alona Bondarenko. Kateryna is the younger sister of professional tennis players Valeria and Alona. She plays right-handed and turned pro in 2000. Her career-high rankings in singles and doubles are world No. 29 and No. 9, respectively. Her best Grand Slam performance in singles was reaching the quarterfinals at the 2009 US Open. Over her career, Bondarenko has defeated top ten players Elena Dementieva, Sara Errani, Ana Ivanovic, Garbiñe Muguruza, Li Na, Agnieszka Radwańska, Roberta Vinci, and Venus Williams. 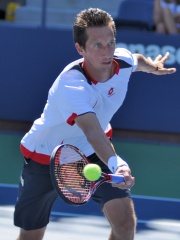 With an HPI of 47.76, Sergiy Stakhovsky is the 9th most famous Ukrainian Tennis Player.  His biography has been translated into 24 different languages.

Sergiy Eduardovych Stakhovsky (Ukrainian: Сергій Едуардович Стаховський, pronounced [serˈɦij stɐˈxɔu̯sʲkɪj]; born January 6, 1986) is a Ukrainian professional tennis player. Stakhovsky turned professional in 2003 and had been playing mostly at the Challenger level from 2005 to 2008. His career-high singles ranking is World No. 31 (September 2010) and he has reached as high as No. 33 in doubles (June 2011).He won his first career title in March 2008, as a lucky loser ranked no. 209, defeating top seed Ivan Ljubičić in the final, thus becoming the first lucky loser to win a title since Christian Miniussi in 1991. He is the elder brother of tennis player Leonard Stakhovsky. He is currently coached by Burghard Riehemann. He is well known for beating eight-time winner and defending champion Roger Federer in the 2nd round of the 2013 Wimbledon Championships ending his record run of 36 consecutive Grand Slam quarterfinals. 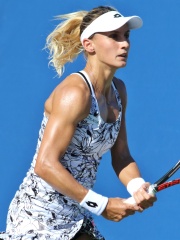 With an HPI of 45.46, Lesia Tsurenko is the 10th most famous Ukrainian Tennis Player.  Her biography has been translated into 26 different languages.

Lesia Viktorivna Tsurenko (Ukrainian: Леся Вікторівна Цуренко; born 30 May 1989) is a Ukrainian tennis player. Tsurenko has won four singles titles on the WTA Tour, as well as six singles titles and eight doubles titles on the ITF Circuit. On 18 February 2019, she reached her best singles ranking of world No. 23. On 28 May 2018, she peaked at No. 115 in the doubles rankings.