This page contains a list of the greatest Paraguayan Soccer Players. The pantheon dataset contains 16,880 Soccer Players, 116 of which were born in Paraguay. This makes Paraguay the birth place of the 33rd most number of Soccer Players behind Australia and Ukraine. 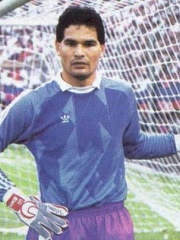 With an HPI of 60.31, José Luis Chilavert is the most famous Paraguayan Soccer Player.  His biography has been translated into 48 different languages on wikipedia.

José Luis Félix Chilavert González (Spanish pronunciation: [xoseˈlwis tʃilaˈβeɾt ɣonˈθaleθ]; born 27 July 1965) is a Paraguayan former professional footballer who played as a goalkeeper for Sportivo Luqueño, Guaraní, San Lorenzo de Almagro, Real Zaragoza, Vélez Sarsfield, RC Strasbourg, Peñarol, and the Paraguay national football team. Chilavert won 12 club titles, including the 1994 Copa Libertadores and the 1994 Intercontinental Cup, while playing for Vélez Sarsfield, and is a three-time IFFHS World's Best Goalkeeper award winner. A fast and agile shot-stopper, known for his leadership, strong personality, and goalkeeping ability, he was regarded as one of the best goalkeepers in the world in his prime; outside of his goalkeeping position, Chilavert was also known for his outfield skills and ability as a free kick specialist, and often took penalties. He scored 67 goals in his professional career, many of them crucial, including eight in international matches. Four of his international goals were scored during Paraguay's qualification for the 2002 FIFA World Cup. Chilavert is the second-highest goalscoring goalkeeper of all time, surpassed only by Brazilian keeper Rogerio Ceni, and is one of only three goalkeepers to score a hat-trick. Chilavert was also known for his eccentricity and his fiery temper, which brought him his fair share of controversies; most notorious among them was his being sent off in 1997 for brawling with Colombian striker Faustino Asprilla. He was nicknamed "El Buldog" ("The Bulldog") and often wore a cartoon bulldog on his goalkeeper jersey.Chilavert appeared for the Paraguay national football team 74 times from 1989 to 2003, scoring 8 goals and representing the team at five major tournaments. Chilavert appeared for Paraguay at two FIFA World Cup tournaments (1998 and 2002), where he served as captain on both occasions, and appeared in three Copa América tournaments (1991, 1993, and 1997). Chilavert was also included in the 1998 FIFA World Cup Team of the Tournament. 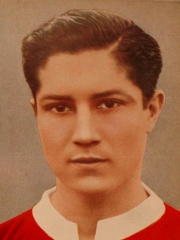 With an HPI of 54.60, Arsenio Erico is the 2nd most famous Paraguayan Soccer Player.  His biography has been translated into 24 different languages.

Arsenio Pastor Erico Martínez (30 March 1915 – 23 July 1977) was a Paraguayan football striker. He is the all-time highest goalscorer in the Argentine first division, with 295 goals according to Argentine Football Association. Previously it had been affirmed that Erico's record was 293 goals, sharing the record with Angel Labruna All the goals in Erico's career in Primera División were scored playing for Independiente. Erico is also considered the best Paraguayan footballer of all time and for some is the best player in history, including Alfredo Di Stefano. A striker noted for his technique, finishing and aerial ability, Erico was regarded one of the finest players of the 1930s and one of greatest players to have played in the Argentinean league.

With an HPI of 52.12, Julio César Romero is the 3rd most famous Paraguayan Soccer Player.  His biography has been translated into 36 different languages.

Julio César Romero Insfrán (born 28 August 1960), nicknamed Romerito, is a Paraguayan former professional footballer who played as a midfielder, considered among the greatest players in Paraguayan football history. He is the only Paraguayan named by Pelé as one of the FIFA 100 in March 2004. 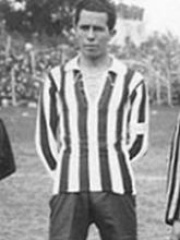 With an HPI of 52.07, Manuel Fleitas Solich is the 4th most famous Paraguayan Soccer Player.  Her biography has been translated into 20 different languages. 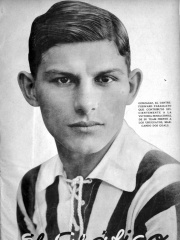 With an HPI of 50.80, Aurelio González is the 5th most famous Paraguayan Soccer Player.  His biography has been translated into 21 different languages.

Aurelio Ramón González Benítez (25 September 1905 in Luque, Paraguay – 9 July 1997) was a Paraguayan football player. González is one of the greatest football players of Paraguay, considered by many as the second best player behind Arsenio Erico. He started his career in Sportivo Luqueño and then moved to Olimpia of Asunción where he spent the rest of his career winning several championships, most notably the three consecutive national championships obtained by Olimpia in 1927, 1928 and 1929.In the early 1930s he rejected an offer worth millions from San Lorenzo de Almagro of Argentina in order to fight for his country, Paraguay, in the Chaco War. He also was a vital player of the Paraguay national team scoring several goals in the 1920s and 1930s, and participated at the 1930 World Cup.As a coach, he led Olimpia of Asunción to numerous championships and to the first Copa Libertadores final in 1960. He also coached the Paraguay national team in the 1958 World Cup. 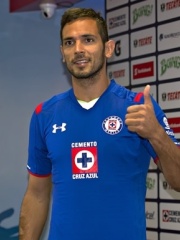 With an HPI of 49.95, Roque Santa Cruz is the 6th most famous Paraguayan Soccer Player.  His biography has been translated into 47 different languages.

Roque Luis Santa Cruz Cantero (locally [ˈroke ˈlwis santa ˈkɾus kanˈteɾo]; born 16 August 1981) is a Paraguayan professional footballer who plays as a striker for Paraguayan club Club Libertad. He is the record goal scorer and has earned over 100 caps for the Paraguay national team, thus he is regarded as one of the best players in the nation's history and has scored in each of the last four decades. Santa Cruz started his career with Olimpia, progressing through their youth system to the first-team squad where he made his debut at the age of 15 in 1997. He finished his career with the club having scored 13 goals in 24 Primera División appearances where Olimpia claimed the 1997, 1998 and 1999 Primera División titles. Santa Cruz scored three goals in four appearances for Paraguay at the 1999 FIFA World Youth Championship before debuting for the Paraguay national team at the 1999 Copa América, where he scored three goals in four appearances. He immediately joined Bundesliga club Bayern Munich in August 1999 for a fee of €5 million, which was the highest transfer fee in Paraguayan football until 2019. where he scored five goals in 28 league appearances in his first season. He faced a series of injuries and heavy competition from teammates Giovane Élber, Roy Makaay and Claudio Pizarro which limited his impact and restricted his appearances for the club. Santa Cruz was part of a successful team for Bayern, winning numerous Bundesliga, DFB-Pokal and DFB-Ligapokal titles. He also won the 2000–01 UEFA Champions League and the 2001 Intercontinental Cup. He left Bayern Munich in July 2007 to join Blackburn Rovers for a transfer fee of €5 million, where he scored 19 goals in the 2007–08 Premier League season. In June 2009, he joined Manchester City for a fee of £17.5 million on a four-year deal. Since his transfer, he was loaned out to Blackburn and Real Betis. A holder of a Spanish passport, Santa Cruz is eligible for unrestricted selection in all EU-based sides.Santa Cruz is ranked equal 75th in the List of top international association football goal scorers by country. He represented Paraguay at the 2002, 2006 and 2010 FIFA World Cup tournaments, and at the 1999, 2007, 2011 (where Paraguay finished runners-up) and 2015 Copa América tournaments. He retired from international football in 2016, but reversed his decision in May 2019.

With an HPI of 49.53, Luis Vargas Peña is the 7th most famous Paraguayan Soccer Player.  His biography has been translated into 20 different languages.

Luis Vargas Peña (1905 in Asunción–1994) was one of the greatest Paraguayan footballers (wingers) before the Second World War.[1] He was the first Paraguayan to score a goal for the Paraguay national football team in a FIFA World Cup, accomplishing that in a match valid for the group stage of the 1930 FIFA World Cup against Belgium, played on 10 July. Vargas Peña also had the honour of being the first captain for Paraguay in a World Cup.[2]During most of his career he played for the club Olimpia Asunción. 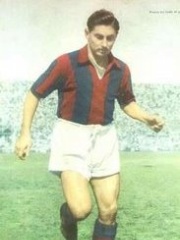 With an HPI of 49.25, Ángel Berni is the 8th most famous Paraguayan Soccer Player.  His biography has been translated into 20 different languages.

With an HPI of 49.09, Cayetano Ré is the 9th most famous Paraguayan Soccer Player.  His biography has been translated into 20 different languages. 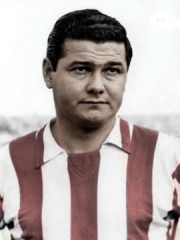 With an HPI of 48.51, Eulogio Martínez is the 10th most famous Paraguayan Soccer Player.  His biography has been translated into 18 different languages.

Eulogio Ramiro Martínez (11 June 1935 – 30 September 1984) was a Paraguayan-born footballer who played as a striker. He played for the Spanish side FC Barcelona in the 1950s and 1960s, and is remembered for being a prolific striker with an excellent finishing ability.He was reputed to be the creator of the "Martinez Turn", which can be seen on Movietone footage of Barcelona's quarter-final match against Wolves in the 1959–60 European Cup. This move later received worldwide acclaim as the "Cruyff Turn" and although Johan Cruyff was at Barcelona when he demonstrated it in the 1974 World Cup, Martinez has never received any credit despite using it at least 14 years earlier.

Which Soccer Players were alive at the same time? This visualization shows the lifespans of the 12 most globally memorable Soccer Players since 1700.