This page contains a list of the greatest Australian Soccer Players. The pantheon dataset contains 16,880 Soccer Players, 125 of which were born in Australia. This makes Australia the birth place of the 31st most number of Soccer Players behind Hungary and South Korea. 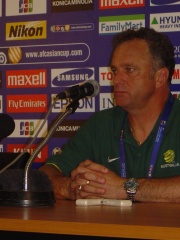 With an HPI of 47.52, Graham Arnold is the most famous Australian Soccer Player.  His biography has been translated into 45 different languages on wikipedia.

Graham James Arnold (born 3 August 1963) is an Australian soccer manager and former player. Arnold was appointed to work as an head coach of the Australian national soccer team in 2000. After head coach Frank Farina was sacked in 2005, Arnold worked with Guus Hiddink for the 2006 FIFA World Cup campaign, in which they made the second round of the finals. After Hiddink left, he became interim coach of the Socceroos. Arnold went on to qualify Australia's U23 men's national soccer team (nicknamed the Olyroos) for the 2008 Beijing Olympics. Arnold then went on to assist Pim Verbeek for qualification of the 2010 World Cup in South Africa. Arnold went on to take the manager role at A-League club the Central Coast Mariners between 2010 and 2013, where he guided the club to a Premiership and a Championship. He is a member of the Football Federation Australia Football Hall of Fame. Arnold went on to win two Premierships, one Championship and an FFA Cup with Sydney FC. In August 2018, Arnold was appointed head coach of the Socceroos - Australia's senior men's national soccer team. Arnold holds a number of A-League records: he has managed the second most games of any manager in the A-League (211), he has achieved the second most wins in the competition's history (116), he has the best career winning percentage of any A-League manager (54.9%), he has the best career unbeaten percentage of any A-League manager (81.5%), and he is one of just three managers to have won multiple A-League championships. In 2018 he replaced Bert van Marwijk as Australian coach after the 2018 FIFA World Cup. 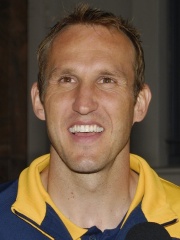 With an HPI of 45.56, Mark Schwarzer is the 2nd most famous Australian Soccer Player.  His biography has been translated into 51 different languages.

Mark Schwarzer (; born 6 October 1972) is an Australian former professional soccer player who played as a goalkeeper. He represented Australia at international level from 1993 to 2013, and was selected for both the 2006 and 2010 FIFA World Cups.Having progressed through the youth ranks of Colo Cougars, Penrith, Blacktown Association and Marconi Stallions, Schwarzer turned professional for National Soccer League side Marconi Stallions in 1990. After making 58 appearances for the club, he moved to German Bundesliga side Dynamo Dresden in 1994, appearing twice, and then to Bundesliga side 1. FC Kaiserslautern in 1995, appearing four times. Schwarzer joined then-second-tier side Bradford City in 1996 and made 16 appearances before joining Premier League club Middlesbrough in February 1997. He made 445 appearances for Middlesbrough, but decided to leave the club in May 2008. He then switched to Premier League side Fulham, and made 218 appearances for the club until he moved to Chelsea in 2013. He was the first – and, to date, only – non-Briton to have made more than 500 Premier League appearances (making him the highest-appearing non-Briton in the Premier League's history), and also the oldest player to have played in the knockout stages of the UEFA Champions League. He joined Leicester City on a free transfer in January 2015 and left the club at the end of their 2015–16 Premier League-winning season. Having played for Australia at under-17 and under-20 level, Schwarzer made his full international debut in a World Cup qualifying match against Canada in 1993 as a substitute after Robert Zabica was sent off in the 17th minute. During the course of his international career, he won a total of 109 caps for his country. He became Australia's most capped player when he surpassed Alex Tobin's appearance record in January 2011. 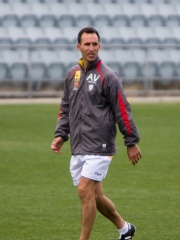 With an HPI of 44.66, Aurelio Vidmar is the 3rd most famous Australian Soccer Player.  His biography has been translated into 46 different languages.

Aurelio Vidmar ( aw-REEL-ee-oh VID-mar; born 3 February 1967) is an Australian association football manager and former player, who is the current manager of Thai League 1 club Bangkok United. He is a former captain of the Australia national team and former coach of the Australia U23 national team.In recognition of decorated national team career, and his service to Adelaide United, the southern end of Hindmarsh Stadium is named the Vidmar End.His brother Tony Vidmar is also a former footballer. 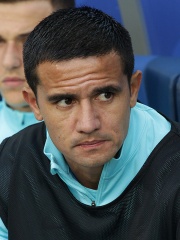 With an HPI of 44.62, Tim Cahill is the 4th most famous Australian Soccer Player.  His biography has been translated into 61 different languages.

Timothy Filiga Cahill (; born 6 December 1979) is an Australian former professional footballer who played as an attacking midfielder but also played as a striker on many occasions. A box-to-box midfielder, Cahill became recognised for "his aggressive and powerful approach and his ability to head the ball in the penalty area". Cahill has scored 50 goals in 108 caps between 2004 and 2018 and is regarded as one of the greatest Australian footballers of all time. He currently works as a pundit for BBC Sport and Sky Sports. In 1997, Cahill left Sydney for England to play professionally; there he was signed by Millwall on a free transfer from Sydney United. He was part of the Millwall side that won the Football League Second Division title in the 2000–01 season, and was also central part of Millwall's run to the 2004 FA Cup Final. Before the start of the 2004–05 season, Cahill was transferred to Everton. He was named both Everton Player of the Season and Everton Players' Player of the Season in his debut season, and in the following year he was named as one of 50 nominees for the Ballon d'Or, becoming the first Everton player in 18 years to be nominated. He was also part of the Everton side that reached the final of the 2008–09 FA Cup. Since leaving Everton in 2012, Cahill has played for the New York Red Bulls, Shanghai Shenhua, Hangzhou Greentown and Melbourne City. After a brief spell at former club Millwall, he ended his career at Jamshedpur. Cahill was the first Australian to score at a FIFA World Cup, scored in three World Cups (2006, 2010, 2014) and has scored the most goals by any Australian in the World Cup with five goals. In 2007, he became the first Australian player to score at an AFC Asian Cup. Cahill is known for his adept heading ability and high vertical leap, having scored many of his goals with his head. He is famous for his regular goal celebration of shadow boxing around the corner flag. 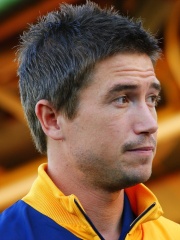 With an HPI of 43.04, Harry Kewell is the 5th most famous Australian Soccer Player.  His biography has been translated into 43 different languages.

Harry Kewell (born 22 September 1978) is an Australian association football coach, manager and former player. His most recent role as a club manager was at English National League side Barnet, and he is currently a first team coach at Celtic F.C. As a player, Kewell represented Leeds United, Liverpool, Galatasaray, Melbourne Victory, Al-Gharafa and Melbourne Heart. While at Leeds he was named the PFA Young Player of the Year in 2000. Internationally, he received 58 caps, and scored 17 goals while playing for Australia. A left winger also capable of playing as an attacking midfielder or second striker, he is often regarded within the media as "Australia's finest football export", despite his career being blighted with injury. In 2012, Kewell was named Australia's greatest footballer in a vote by Australian fans, players and media.Kewell scored a goal against Croatia which took Australia through to the knockout stages of the 2006 FIFA World Cup, the Australian national team's second World Cup. He is a member of the Executive Committee of the Australian Professional Footballers' Association. Kewell also has a British passport through his father's heritage. Former Middlesbrough midfielder-turned pundit Robbie Mustoe named Kewell as one of the greatest players he had played against but questioned his consistency and attitude after his initial injuries. Former German international Michael Ballack has also highlighted Kewell's ability and inconsistency.Kewell has represented Australia at the 1995 FIFA U-17 World Championship, the 1997 FIFA Confederations Cup, where Australia finished runners-up, the 2004 OFC Nations Cup, which Australia claimed for the fourth time, the 2006 FIFA World Cup, the 2007 AFC Asian Cup, the 2010 FIFA World Cup and the 2011 AFC Asian Cup, where Australia finished runners-up. 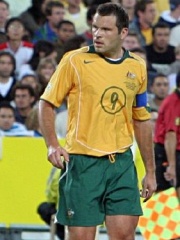 With an HPI of 42.90, Mark Viduka is the 6th most famous Australian Soccer Player.  His biography has been translated into 44 different languages.

Mark Antony Viduka ( vih-DOOK-ə; born 9 October 1975) is an Australian former soccer player who played as a centre forward. He captained the Australia national team to the Round of 16 at the 2006 FIFA World Cup which remains their best ever performance to date. His four goals in the UEFA Champions League are the most scored by any Australian player. 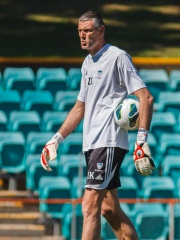 With an HPI of 41.72, Zeljko Kalac is the 7th most famous Australian Soccer Player.  His biography has been translated into 34 different languages.

Zeljko Kalac (born 16 December 1972) is an Australian former soccer goalkeeper, who is currently the manager of Northbridge Bulls. Nicknamed "Spider" due to his tall, gangly figure, standing at 2.02 m., Kalac is the tallest player to have represented the Australia national football team.Kalac's preferred playing number (when not the conventional number 1) is 18 and has generally worn this number when playing for Australia. However, when he joined Italian club A.C. Milan in 2005, the number 18 was already claimed by Marek Jankulovski, who joined at the same time, and so he chose number 16. When he transferred to Kavala, number 18 was also taken, so he settled for number 60. 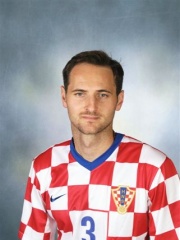 With an HPI of 41.37, Josip Šimunić is the 8th most famous Australian Soccer Player.  His biography has been translated into 38 different languages.

Josip "Joe" Šimunić (Croatian pronunciation: [jǒsip ʃǐmunitɕ]; born 18 February 1978) is a Croatian retired footballer and current manager of the Croatia national under-19 team. Born in Australia to Bosnian Croat parents, Šimunić started his career at Melbourne Knights then moved to Germany where he spent 14 seasons in the Bundesliga with Hamburger SV, Hertha BSC and TSG 1899 Hoffenheim before finishing his career in Croatia with Dinamo Zagreb. He played for Croatia from 2001 to 2013, appeared in five major tournaments for Croatia – 2002 and 2006 World Cups, as well as the 2004, 2008 and 2012 European Championships – and is the fifth most capped player in the history of the Croatia national team. 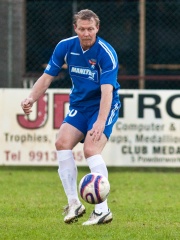 With an HPI of 40.82, Matthew Bingley is the 9th most famous Australian Soccer Player.  His biography has been translated into 45 different languages.

Matthew Bingley (born 16 August 1971) is an Australian former soccer player. A utility who can play in midfield or defence, he has played over 300 matches in nearly 20 years at the highest level of domestic football in Australia. Bingley also made 14 appearances for the Australian national team, scoring five goals. 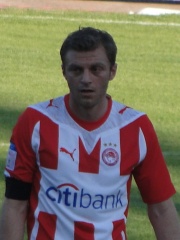 With an HPI of 39.73, Avraam Papadopoulos is the 10th most famous Australian Soccer Player.  His biography has been translated into 50 different languages.

Avraam Papadopoulos (Greek: Αβραάμ Παπαδόπουλος; born 3 December 1984) is a Greek former professional footballer who played as a centre-back. He was born in Melbourne, Australia, to Greek parents.