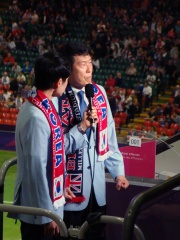 With an HPI of 57.83, Cha Bum-kun is the most famous Soccer Player.  His biography has been translated into 33 different languages on wikipedia.

Cha Bum-kun (Korean: 차범근; Korean pronunciation: [tɕʰɐbʌmɡɯn] or [tɕʰɐ] [pʌmɡɯn]; born 22 May 1953) is a South Korean former football manager and player, nicknamed Tscha Bum or "Cha Boom" in Germany because of his thunderous ball striking ability. He showed explosive pace and powerful shots with his thick thighs. He is widely regarded as one of the greatest Asian footballers of all time.In 1972, Cha had been capped for the South Korea national team as the youngest player of the time at the age of 18. He is the youngest player to ever reach 100 caps in the world at 24 years and 35 days, and the all-time leading goalscorer of the South Korean national team with 58 goals. After dominating Asian competitions including the 1978 Asian Games, he left for West Germany and played for Eintracht Frankfurt and Bayer Leverkusen. He scored a total of 121 goals in two Bundesliga clubs, and won the UEFA Cup with each team.After his retirement, he opened a football academy to develop youth players in South Korea, and managed the national team for the 1998 FIFA World Cup. 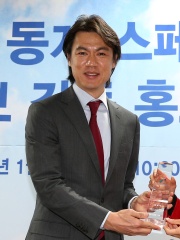 With an HPI of 53.49, Hong Myung-bo is the 2nd most famous Soccer Player.  His biography has been translated into 41 different languages.

Hong Myung-bo (Korean: 홍명보, Hanja: 洪明甫; Korean pronunciation: [hoŋmjʌŋbo]; born 12 February 1969) is a South Korean former footballer who played as a sweeper, and the current head coach of Ulsan Hyundai. Hong is often considered one of the greatest Asian footballers of all time.Hong was a member of the South Korean national team in four FIFA World Cups, and was the first Asian player to play in four consecutive World Cup final tournaments. He is also the first Asian player ever to receive the Bronze Ball at the World Cup. He gained attention after showing his outstanding ability in World Cup and Asian competitions. He received some votes in elections for the FIFA World Player of the Year, finishing 21st in 1996 and 17th in 2002. Furthermore, he was also selected for the FIFA 100, Pelé's selection about the 125 greatest living footballers in the world. 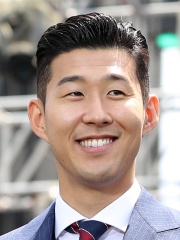 With an HPI of 51.28, Son Heung-min is the 3rd most famous Soccer Player.  His biography has been translated into 59 different languages.

Son Heung-min (Korean: 손흥민 ; born 8 July 1992) is a South Korean professional footballer who plays as a forward for Premier League club Tottenham Hotspur and captains the South Korea national team. Considered one of the best forwards in the world and one of the greatest Asian footballers of all time, he is known for his explosive speed, finishing, two-footedness and ability to link play.Born in Chuncheon, Gangwon Province, Son relocated to Germany to join Hamburger SV at 16, making his debut in the Bundesliga in 2010. In 2013, he moved to Bayer Leverkusen for a club record €10 million before signing for Tottenham for £22 million two years later, becoming the most expensive Asian player in history. While at Tottenham, Son became the top Asian goalscorer in both Premier League and Champions League history, and surpassed Cha Bum-kun's record for most goals scored by a Korean player in European competition. In 2019, he became the second Asian in history to reach and start a UEFA Champions League final after compatriot Park Ji-sung. In the 2021–22 season, he won, shared alongside Mohamed Salah, the Premier League Golden Boot award with 23 goals, becoming the first Asian player to win it. With Tottenham attacking partner Harry Kane, Son also holds the all-time Premier League record for most goal combinations between two specific players, wherein a goal is scored by one with the assist provided by the other in either direction, as well as the record for most in a single match (4 against Southampton) and single season (14 in 2020/21), which has led many pundits and journalists to describe the pair as the best attacking duo in league history. They have 41 total combinations as of the start of the 2022/23 season, which are almost evenly split between goals and assists for both. As a player at Tottenham, he has reached, and been involved in, the finals of two major tournaments: the 2018–19 UEFA Champions League and the 2020–21 EFL Cup, both of which they ultimately lost. A full international since 2010, Son has represented South Korea at the 2014 and 2018 FIFA World Cups and is his country's joint top scorer at World Cups, tied with Park Ji-sung and Ahn Jung-hwan on three goals. Son has also represented South Korea at the 2018 Asian Games, where the team won gold, and the 2011, 2015, and 2019 editions of the AFC Asian Cup. Korea was the runner-up in 2015. Outside of football, Son is viewed as a symbol of national pride in South Korea for his achievements, and has been listed in Forbes Korea Power Celebrity 40 since 2019, where he ranked third in 2022. In June 2022, Son received the Cheongnyong Medal, the highest order of merit for achievement in sports given to a South Korea citizen, for his achievements in football. He is credited with causing a large uptick in interest in and the number of supporters of Tottenham among South Koreans and even East Asians more broadly, resulting in the club's social media strategy altering in order to target and cater to Koreans using both the club's standard English language accounts and their newer accounts in Korean. 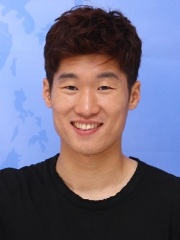 With an HPI of 50.22, Park Ji-sung is the 4th most famous Soccer Player.  His biography has been translated into 62 different languages.

Park Ji-sung (Korean: 박지성; Hanja: 朴智星; Korean pronunciation: [pak̚.t͈ɕi.sʌŋ]; born 30 March 1981) is a South Korean former professional footballer who played as a midfielder. Born in the South Korean capital Seoul, Park is one of the most successful Asian players in football history, having won 19 trophies in his career. He is the first Asian footballer to have won the UEFA Champions League, to play in a UEFA Champions League final, as well as the first Asian to have won the FIFA Club World Cup. Park was able to play anywhere across the midfield and was noted for his exceptional fitness level, discipline, work ethic and off-the-ball movement. His remarkable endurance levels earned him the nickname "Three-Lungs" Park.Park began his football career in his native South Korea and played for the Myongji University team before moving to Japan to play for Kyoto Purple Sanga. After Park's national team manager Guus Hiddink moved back to the Netherlands to manage PSV Eindhoven, Park followed him to the Dutch side a year later. After PSV reached the semi-finals of the 2004–05 UEFA Champions League, Park's talents were recognised by Manchester United manager Sir Alex Ferguson and he signed Park for a fee of around £4 million in July 2005. In his time at United, Park won four Premier League titles, the 2007–08 UEFA Champions League, and the 2008 FIFA Club World Cup. He moved to Queens Park Rangers in July 2012 after suffering a reduction in his number of appearances for Manchester United the previous season. However, an injury-interrupted season with QPR, combined with the club's relegation, led to Park rejoining PSV on loan for the 2013–14 season. As a member of the South Korea national team, Park won 100 caps and scored 13 goals. He was a member of the team that finished fourth at the 2002 FIFA World Cup, and also represented his nation at the 2006 FIFA World Cup and the 2010 FIFA World Cup. At the World Cup, he was named man of the match four times, the most of any Asian player, and is currently South Korea's joint all-time leading World Cup goalscorer with three goals alongside Ahn Jung-hwan and Son Heung-min, having scored in three consecutive tournaments. 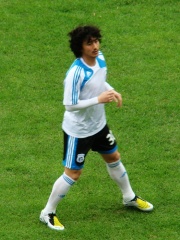 With an HPI of 48.47, Ahn Jung-hwan is the 5th most famous Soccer Player.  His biography has been translated into 34 different languages.

Ahn Jung-hwan (Hangul: 안정환; Hanja: 安貞桓; Korean pronunciation: [an.dʑʌŋ.ɦwan] or [an] [tɕʌŋ.ɦwan]; born 27 January 1976) is a South Korean former football player and television personality. Ahn played for South Korea as a second striker and scored a total of three goals in two FIFA World Cups, including a golden goal against Italy. After his retirement as a footballer, he became an entertainer and a football commentator. 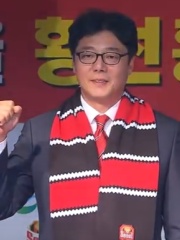 With an HPI of 45.87, Hwang Sun-hong is the 6th most famous Soccer Player.  His biography has been translated into 29 different languages.

Hwang Sun-hong (born 14 July 1968) is a South Korean former football player and current manager of the South Korea national under-23 football team. He was the most notable South Korean striker in the 1990s and early 2000s. 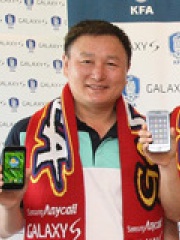 With an HPI of 45.15, Huh Jung-moo is the 7th most famous Soccer Player.  His biography has been translated into 23 different languages. 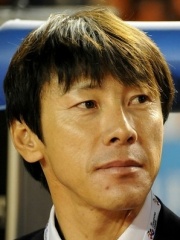 With an HPI of 44.32, Shin Tae-yong is the 8th most famous Soccer Player.  His biography has been translated into 24 different languages.

Shin Tae-yong (Korean: 신태용, Hanja: 申台龍; born on 11 May 1970) is a South Korean former professional footballer and manager who is currently coaching the Indonesia national football team. He is the first man to win the Asian Club Championship/AFC Champions League as both player and manager, having won the 1995 Asian Club Championship and the 2010 AFC Champions League with Seongnam Ilhwa Chunma.

With an HPI of 44.07, Kim Joo-sung is the 9th most famous Soccer Player.  His biography has been translated into 19 different languages.

Kim Joo-sung (born 17 January 1966) is a former South Korean football player. Kim is regarded as one of the greatest Asian footballers of the 20th century. He was nominated for the IFFHS Asia's Player of the Century, finishing second place.

With an HPI of 43.45, Choi Kang-hee is the 10th most famous Soccer Player.  His biography has been translated into 18 different languages.