This page contains a list of the greatest Haitian Singers. The pantheon dataset contains 3,541 Singers, 1 of which were born in Haiti. This makes Haiti the birth place of the 108th most number of Singers behind Republic of the Congo and Kyrgyzstan.

The following people are considered by Pantheon to be the most legendary Haitian Singers of all time. This list of famous Haitian Singers is sorted by HPI (Historical Popularity Index), a metric that aggregates information on a biography’s online popularity. 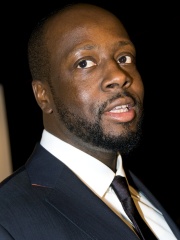 With an HPI of 59.09, Wyclef Jean is the most famous Haitian Singer.  His biography has been translated into 45 different languages on wikipedia.

Nel Ust Wyclef Jean (; born October 17, 1969) is a Haitian rapper, musician and actor. At the age of nine, Jean immigrated to the United States with his family. He first achieved fame as a member of the New Jersey hip hop group the Fugees, alongside Lauryn Hill and Pras Michel. They released the albums Blunted on Reality (1994) and The Score (1996), the latter becoming one of the best-selling albums of all time. Jean would follow this with the release of his first solo studio album, Wyclef Jean Presents The Carnival (1997), which contains the top ten hit "Gone till November". Jean would continue to have a successful music career as a soloist. He released an additional eight studio albums; including the RIAA Platinum certified album, The Ecleftic: 2 Sides II a Book (2000), which reached the top ten on the Billboard 200 chart. While he also released the commercially successful singles "911" (featuring Mary J. Blige), and "Sweetest Girl (Dollar Bill)" (featuring Akon, Niia & Lil Wayne)"; featured on Destiny Child's "No, No, No", and the US Billboard Hot 100 number one single "Hips Don't Lie" by Shakira; and wrote and produced the single "Maria Maria" by Santana. In August 2010, Jean filed for candidacy in the 2010 Haitian presidential election. However, Haiti's Provisional Electoral Council ruled him ineligible to stand for office, as he had not met the constitutional requirement to have been a resident in Haiti for five years prior to the election. Jean's highly publicized efforts to raise relief funds after the 2010 Haitian earthquake were channeled through his charitable organization, Yéle Haiti. The charity, which conducted education and welfare activities in Haiti between 2005 and 2010, effectively closed in 2012. The New York Times reported that much of the money raised by the organization in the Hope for Haiti Now telethon was retained by Jean for his own benefit. In 2012, Jean published his memoir Purpose: An Immigrant's Story. Jean performed his single "Dar um Jeito (We Will Find a Way)", at the closing ceremony for the 2014 FIFA World Cup in Brazil. He has won three Grammy Awards, and has received a Golden Globe Award nomination for his musical work. In 2011, President Michel Martelly of Haiti awarded Jean with the National Order of Honour and Merit to the rank of Grand Officer. Jean has also been inducted into the New Jersey Hall of Fame.