This page contains a list of the greatest Philosophers. The pantheon dataset contains 1,081 Philosophers, 9 of which were born in Libya. This makes Libya the birth place of the 21st most number of Philosophers behind Ukraine and Belgium.

The following people are considered by Pantheon to be the most legendary Philosophers of all time. This list of famous Philosophers is sorted by HPI (Historical Popularity Index), a metric that aggregates information on a biography’s online popularity. 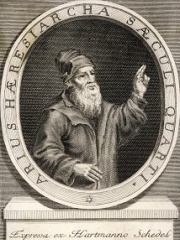 With an HPI of 76.84, Arius is the most famous Philosopher.  His biography has been translated into 62 different languages on wikipedia.

Arius (; Koinē Greek: Ἄρειος, Áreios; 250 or 256–336) was a Cyrenaic presbyter, ascetic, and priest best known for the doctrine of Arianism. His teachings about the nature of the Godhead in Christianity, which emphasized God the Father's uniqueness and Christ's subordination under the Father, and his opposition to what would become the dominant Christology, Homoousian Christology, made him a primary topic of the First Council of Nicaea convened by Emperor Constantine the Great in 325. After Emperors Licinius and Constantine legalized and formalized the Christianity of the time in the Roman Empire, Constantine sought to unify the newly recognized Church and remove theological divisions. The Christian Church was divided over disagreements on Christology, or the nature of the relationship between the first and second persons of the Trinity. Homoousian Christians, including Athanasius of Alexandria, used Arius and Arianism as epithets to describe those who disagreed with their doctrine of coequal Trinitarianism, a Homoousian Christology representing God the Father and Jesus Christ the Son as "of one essence" ("consubstantial") and coeternal. Negative writings describe Arius's theology as one in which there was a time before the Son of God, when only God the Father existed. Despite concerted opposition, Arian Christian churches persisted throughout Europe, the Middle East, and North Africa, especially in various Germanic kingdoms, until suppressed by military conquest or voluntary royal conversion between the fifth and seventh centuries. The Son's precise relationship with the Father had been discussed for decades before Arius's advent; Arius intensified the controversy and carried it to a Church-wide audience, where others like Eusebius of Nicomedia proved much more influential in the long run. In fact, some later Arians disavowed the name, claiming not to have been familiar with the man or his specific teachings. However, because the conflict between Arius and his foes brought the issue to the theological forefront, the doctrine he proclaimed—though had not originated—is generally labeled as "his". 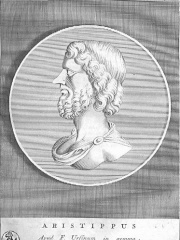 With an HPI of 73.51, Aristippus is the 2nd most famous Philosopher.  His biography has been translated into 52 different languages.

Aristippus of Cyrene (; Ancient Greek: Ἀρίστιππος ὁ Κυρηναῖος; c. 435 – c. 356 BCE) was a hedonistic Greek philosopher and the founder of the Cyrenaic school of philosophy. He was a pupil of Socrates, but adopted a very different philosophical outlook, teaching that the goal of life was to seek pleasure by adapting circumstances to oneself and by maintaining proper control over both adversity and prosperity. His view that pleasure is the only good came to be called ethical hedonism. Despite having two sons, Aristippus identified his daughter Arete as the "intellectual heiress" of his work.There are indications that Aristippus was conflated with his grandson, Aristippus the Younger. 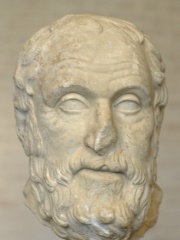 With an HPI of 65.25, Carneades is the 3rd most famous Philosopher.  His biography has been translated into 36 different languages.

Carneades (; Greek: Καρνεάδης, Karneadēs, "of Carnea"; 214/3–129/8 BC) was a Greek philosopher and perhaps the most prominent head of the Skeptical Academy in ancient Greece. He was born in Cyrene. By the year 159 BC, he had begun to attack many previous dogmatic doctrines, especially Stoicism and even the Epicureans whom previous skeptics had spared. As scholarch (leader) of the Academy, he was one of three philosophers sent to Rome in 155 BC where his lectures on the uncertainty of justice caused consternation among leading politicians. He left no writings. Many of his opinions are known only via his successor Clitomachus. He seems to have doubted the ability not just of the senses but of reason too in acquiring truth. His skepticism was, however, moderated by the belief that we can, nevertheless, ascertain probabilities (not in the sense of statistical probability, but in the sense of persuasiveness) of truth, to enable us to act. 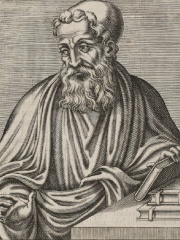 With an HPI of 64.22, Synesius is the 4th most famous Philosopher.  His biography has been translated into 30 different languages.

Synesius (; Greek: Συνέσιος; c. 373 – c. 414), was a Greek bishop of Ptolemais in ancient Libya, a part of the Western Pentapolis of Cyrenaica after 410. He was born of wealthy parents at Balagrae (now Bayda, Libya) near Cyrene between 370 and 375.

With an HPI of 58.67, Theodorus the Atheist is the 5th most famous Philosopher.  His biography has been translated into 24 different languages.

Theodorus the Atheist (Greek: Θεόδωρος ὁ ἄθεος; c. 340 – c. 250 BCE), of Cyrene, was a Greek philosopher of the Cyrenaic school. He lived in both Greece and Alexandria, before ending his days in his native city of Cyrene. As a Cyrenaic philosopher, he taught that the goal of life was to obtain joy and avoid grief, and that the former resulted from knowledge, and the latter from ignorance. However, his principal claim to fame was his alleged atheism. He was usually designated by ancient writers ho atheos (ὁ ἄθεος), "the atheist."

With an HPI of 58.07, Hegesias of Cyrene is the 6th most famous Philosopher.  His biography has been translated into 21 different languages.

Hegesias (Greek: Ἡγησίας; fl. 290 BC) of Cyrene was a Cyrenaic philosopher. He argued that eudaimonia (happiness) is impossible to achieve, and that the goal of life should be the avoidance of pain and sorrow. Conventional values such as wealth, poverty, freedom, and slavery are all indifferent and produce no more pleasure than pain. Cicero claims that Hegesias wrote a book called ἀποκαρτερῶν (Death by Starvation), which persuaded so many people that death is more desirable than life that Hegesias was banned from teaching in Alexandria. It has been thought by some that Hegesias was influenced by Buddhist teachings.

With an HPI of 57.02, Arete of Cyrene is the 7th most famous Philosopher.  Her biography has been translated into 21 different languages.

Arete of Cyrene (; Greek: Ἀρήτη; fl. 5th–4th century BC) was a Cyrenaic philosopher who lived in Cyrene, Libya. She was the daughter of Aristippus of Cyrene.

With an HPI of 54.29, Anniceris is the 8th most famous Philosopher.  His biography has been translated into 17 different languages.

Anniceris (Greek: Ἀννίκερις; fl. 300 BC) was a Cyrenaic philosopher. He argued that pleasure is achieved through individual acts of gratification which are sought for the pleasure that they produce, but he also laid great emphasis on the love of family, country, friendship and gratitude, which provide pleasure even when they demand sacrifice.

With an HPI of 53.83, Lucius Annaeus Cornutus is the 9th most famous Philosopher.  His biography has been translated into 20 different languages.

Lucius Annaeus Cornutus (Ancient Greek: Ἀνναῖος Κορνοῦτος), a Stoic philosopher, flourished in the reign of Nero (c. 60 AD), when his house in Rome was a school of philosophy.

Pantheon has 9 people classified as philosophers born between 434 BC and 370. Of these 9, none of them are still alive today. The most famous deceased philosophers include Arius, Aristippus, and Carneades.