This page contains a list of the greatest Athletes. The pantheon dataset contains 3,059 Athletes, 31 of which were born in South Korea. This makes South Korea the birth place of the 27th most number of Athletes behind Greece and Romania.

The following people are considered by Pantheon to be the top 10 most legendary Athletes of all time. This list of famous Athletes is sorted by HPI (Historical Popularity Index), a metric that aggregates information on a biography’s online popularity. Visit the rankings page to view the entire list of Athletes. 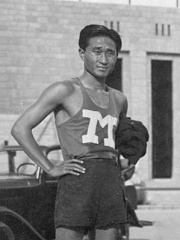 With an HPI of 48.53, Nam Sung-yong is the most famous Athlete.  His biography has been translated into 16 different languages on wikipedia.

Nam Sung-yong (November 23, 1912 – February 20, 2001) was a Korean Olympian who won a bronze medal in the marathon at the 1936 Summer Olympics, completing the run in 2 hours, 31 minutes, and 42 seconds. He was born in Junten (Suncheon), Japanese Korea and received higher education in Japan. Like the gold medalist Sohn Kee-chung, Nam Sung-yong used the Japanese pronunciation of his name, Nan Shōryū as Korea was then a part of the Japanese Empire.After the Olympics, Nam Sung-yong worked at the Korean Sporting Association with Sohn Kee-chung. 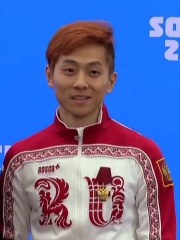 With an HPI of 44.53, Viktor An is the 2nd most famous Athlete.  His biography has been translated into 33 different languages.

Viktor An (Russian: Виктор Ан; born Ahn Hyun-soo (Korean: 안현수) on November 23, 1985), is a South Korean-born Russian short-track speed skating coach and retired short-track speed skater. With a total of eight Olympic medals, six gold and two bronze, he is the only short track speed skater in Olympic history to win gold in every distance, and the first to win a medal in every distance at a single Games. He has the most Olympic gold medals in the sport, three of which he won in the 2006 Winter Olympics and the other three in the 2014 Winter Olympics. Considered to be the greatest short track speed skater of all time, he is a six-time overall World champion (2003-2007, 2014), two-time overall World Cup winner (2003–04, 2005–06), and the 2014 European champion. He holds the most overall titles at the World Short Track Speed Skating Championships, and is the only male short track skater to win five consecutive world titles.In 2008, Ahn suffered a knee injury and could not regain his health by the time the national qualifiers for Vancouver 2010 came around. His recovery being slow and his South Korean local team dissolved in 2010, Ahn, aiming for his second Olympics, became a Russian citizen the next year and began racing for the Russian team. After winning gold in Sochi, Ahn explained his reasons for joining the Russian team saying, "I wanted to train in the best possible environment and I proved my decision was not wrong." As expected, a gold-winning athlete leaving the national team caused public uproar in South Korea. However, it was aimed not at Ahn, but at the country's skating union. Most South Korean fans in a poll said they understood his decision. Ahn continued his skating career in his adopted nation until 2019 and declared his retirement in April 2020. 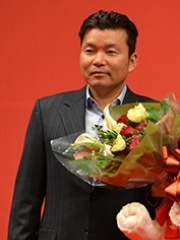 With an HPI of 39.93, Hwang Young-cho is the 3rd most famous Athlete.  His biography has been translated into 21 different languages.

Hwang Young-cho (born 22 March 1970) is a former South Korean athlete, winner of the marathon race at the 1992 Summer Olympics and 1994 Asian Games. 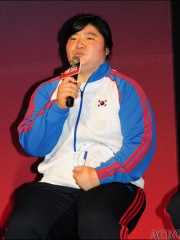 With an HPI of 34.08, Jang Mi-ran is the 4th most famous Athlete.  Her biography has been translated into 19 different languages. 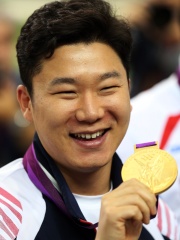 With an HPI of 34.01, Jin Jong-oh is the 5th most famous Athlete.  His biography has been translated into 25 different languages.

Jin Jong-oh (진종오; Korean pronunciation: [tɕin.dʑoŋ.o]; born 24 September 1979) is a South Korean sports shooter who competed at the 2004, 2008, 2012 and 2016 Summer Olympics. The only individual four-time Olympic champion in shooting, he is the most successful individual shooter at the Olympics, being the only athlete to have won three consecutive Olympic gold medals in an event (men's 50 metre pistol) in shooting. He holds the world record in both 10 metre air pistol and 50 metre pistol and held the final world record in 50 metre pistol until Jitu Rai broke it in 2017.

With an HPI of 33.87, Kim Soo-nyung is the 6th most famous Athlete.  Her biography has been translated into 20 different languages.

Kim Soo-nyung (born April 5, 1971 in Chungcheongbuk-do) is a former member of the South Korean Olympic archery team in 1988, 1992, and 2000. She has earned a total of four gold medals at the Olympics, one for the individual event in 1988 and three for the team event in 1988, 1992 and 2000. She won a further silver medal in 1992 and a bronze in 2000, both for the individual events. She retired after the 1992 Olympics to marry and raise two children, resuming her training in 1999, in the lead up to the 2000 Summer Olympics.She competed at the 1986 Asian Games winning a gold medal in the team event and a bronze in the individual. She also won two consecutive individual and team world championships in 1989 and 1991.In 2011, Kim was declared the Female Archer of the 20th Century by the International Archery Federation (FITA). 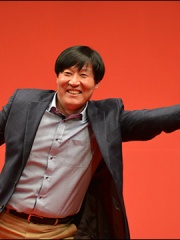 With an HPI of 33.45, Kim Young-ho is the 7th most famous Athlete.  His biography has been translated into 17 different languages.

Kim Young-ho (born April 9, 1971 in Nonsan, Chungcheongnam-do, South Korea) is a South Korean foil fencer. At the 2000 Olympics in Sydney, he won the gold medal in individual foil, defeating Ralf Bissdorf of Germany in the final. He became the first Olympic Champion in fencing from Korea, and the first Asian man to win an Olympic Gold medal in fencing. At the 1997 World Championships he had perhaps one of the most heroic losses in top level fencing. With approximately 2 minutes left in the final period, Kim was down 11-3 to Sergei Golubitsky of Ukraine. As direct elimination fencing bouts go to 15 touches, most fencers would presume Kim was about done and was fencing for pride. 8 touches later Kim had tied the score. He and Golubitsky (as Sergei stated on his "Golden Bouts" tape, "and now the nightmare begins....the comeback of Kim") traded touches until Kim finally lost 15–14. At la belle (tied for the last touch, 14-14), Kim almost pulled the win out, but his attack failed to register (although he had struck valid target) and Golubitsky dodged a bullet, allowing him the chance to win the bout. The bout is at https://www.youtube.com/watch?v=6HKfnJArUZw 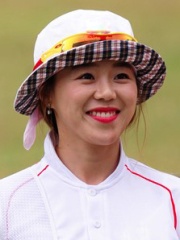 With an HPI of 32.76, Chang Hye-jin is the 8th most famous Athlete.  Her biography has been translated into 25 different languages.

Chang Hye-jin (Korean: 장혜진; Korean pronunciation: [tɕɐŋ.çe.dʑin] or [tɕɐŋ] [çe.dʑin]; born 13 May 1987) is a South Korean recurve archer. A two-time Olympic gold medalist, Chang was the Olympic champion in both the women's individual and women's team events at 2016 Summer Olympics in Rio de Janeiro. She is a former number one-ranked recurve archer, having headed the World Archery Rankings between 2017 and 2019. After being introduced to archery at the age of eleven, Chang made her international debut in 2008. She first qualified for the senior South Korean national team in 2010 and has since regularly represented her country at international competitions. In addition to her Olympic achievements Chang has won team gold medals at the World Archery Championships, the Asian Games, and the Summer Universiade, and was the women's individual runner-up at the 2017 World Championships. 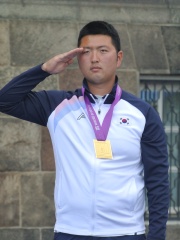 With an HPI of 32.61, Kim Woo-jin is the 9th most famous Athlete.  His biography has been translated into 30 different languages. 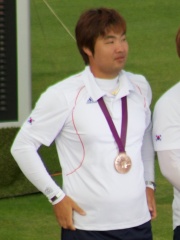 With an HPI of 32.38, Im Dong-hyun is the 10th most famous Athlete.  His biography has been translated into 27 different languages.

Im Dong-hyun (Korean: 임동현; Hanja: 林東賢; Korean pronunciation: [im.doŋ.ɦjʌn]; born 12 May 1986) is a South Korean archer. He competes for the South Korean national team and is a former world number one. He has 20/200 vision in his left eye and 20/100 vision in his right eye, meaning he needs to be 10 times closer to see objects clearly with his left eye, compared to someone with perfect vision.