This page contains a list of the greatest Russian Athletes. The pantheon dataset contains 3,059 Athletes, 313 of which were born in Russia. This makes Russia the birth place of the 3rd most number of Athletes behind United States and Germany.

The following people are considered by Pantheon to be the top 10 most legendary Russian Athletes of all time. This list of famous Russian Athletes is sorted by HPI (Historical Popularity Index), a metric that aggregates information on a biography’s online popularity. Visit the rankings page to view the entire list of Russian Athletes. 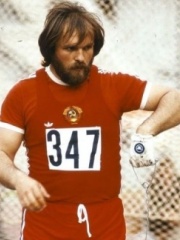 With an HPI of 59.59, Yuriy Sedykh is the most famous Russian Athlete.  His biography has been translated into 35 different languages on wikipedia.

Yuriy Georgiyevich Sedykh (Russian: Ю́рий Гео́ргиевич Седы́х, Ukrainian: Юрій Георгійович Сєдих) (11 June 1955 – 14 September 2021) was a track and field athlete who represented the Soviet Union from 1976–1991 in the hammer throw. He was a European, World and Olympic Champion, and holds the world record with a throw of 86.74 m in 1986. 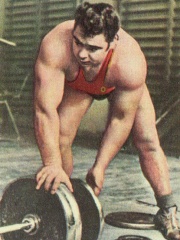 With an HPI of 57.30, Vasily Alekseyev is the 2nd most famous Russian Athlete.  His biography has been translated into 27 different languages.

Vasily Ivanovich Alekseyev (Russian: Василий Иванович Алексеев; 7 January 1942 – 25 November 2011) was a Soviet weightlifter. He set 80 world-records and 81 Soviet records in weightlifting and won Olympic gold medals at the 1972 and 1976 games. 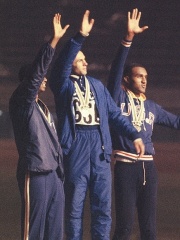 With an HPI of 56.28, Valeriy Brumel is the 3rd most famous Russian Athlete.  His biography has been translated into 26 different languages.

Valeriy Nikolayevich Brumel (Russian: Валерий Николаевич Брумель; 14 April 1942 – 26 January 2003) was an Olympic athlete of the USSR who specialised in the high jump. Brumel was a champion who held several world records achieved at the 1964 Summer Olympics. In 1965, Brumel suffered a motorcycle accident and injured his right leg, which ended his athletic career; afterwards, the Olympic athlete became an actor, a screenplay writer, and a novelist. 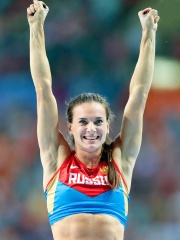 With an HPI of 54.98, Yelena Isinbayeva is the 4th most famous Russian Athlete.  Her biography has been translated into 69 different languages.

Yelena Gadzhievna Isinbayeva (Russian: Елена Гаджиевна Исинбаева, IPA: [jɪˈlʲɛnə gɐˈdʐɨjɪvnə ɪsʲɪnˈbajɪvə]; born 3 June 1982) is a Russian former pole vaulter. She is a two-time Olympic gold medalist (2004 and 2008), a three-time World Champion (2005, 2007 and 2013), the current world record holder in the event, and is widely considered the greatest female pole-vaulter of all time. Isinbayeva was banned from the 2016 Rio Olympics after revelations of an extensive state-sponsored doping programme in Russia, thus dashing her hopes of a grand retirement winning the Olympic gold medal. She retired from athletics in August 2016 after being elected to serve an 8-year term on the IOC's Athletes' Commission.Isinbayeva has been a major champion on nine occasions (Olympic, World outdoor and indoor champion and European outdoor and indoor champion). She was also the jackpot winner of the IAAF Golden League series in 2007 and 2009. After poor performances at the world championships in 2009 and 2010, she took a year-long break from the sport. She became the first woman to clear the five-metre barrier in 2005. Her current world record is 5.06 m outdoors, set in Zurich in August 2009. Her 5.01 m indoors was the world record for just over a year. The latter was Isinbayeva's twenty-eighth pole vault world record. Isinbayeva was named Female Athlete of the Year by the IAAF in 2004, 2005 and 2008, and World Sportswoman of the Year by Laureus in 2007 and 2009. In 2007 she entered in the FICTS "Hall of Fame" and was awarded with "Excellence Guirlande D'Honneur". She was given the Prince of Asturias Award for Sports in 2009. She is one of only ten athletes (along with Valerie Adams, Usain Bolt, Veronica Campbell-Brown, Jacques Freitag, Kirani James, Jana Pittman, Dani Samuels, David Storl and Faith Kipyegon) to win world championships at the youth, junior, and senior level of an athletic event. 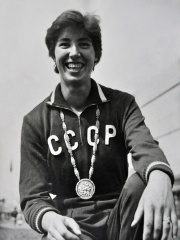 With an HPI of 54.28, Elvīra Ozoliņa is the 5th most famous Russian Athlete.  Her biography has been translated into 28 different languages. 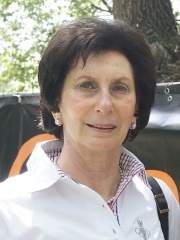 With an HPI of 53.84, Irena Szewińska is the 6th most famous Russian Athlete.  Her biography has been translated into 39 different languages.

Irena Szewińska (née Kirszenstein; Polish pronunciation: [iˈrɛna ʂɛˈviɲska]; 24 May 1946 – 29 June 2018) was a Polish sprinter who was one of the world's foremost athletes for nearly two decades, in multiple events. She is the only athlete in history, male or female, to have held the world record in the 100 m, the 200 m and the 400 m.

With an HPI of 53.31, Pyotr Bolotnikov is the 7th most famous Russian Athlete.  His biography has been translated into 34 different languages.

Pyotr Grigoryevich Bolotnikov (Russian: Пётр Григо́рьевич Боло́тников; 8 March 1930 – 20 December 2013) was a Soviet Track and field athlete who competed mainly in long-distance running events. He was the winner of the 10,000 metres at the 1960 Summer Olympics. Born in Zinovkino, Krasnoslobodsky District, Mordovian ASSR (now the Republic of Mordovia), Bolotnikov started athletics only at age twenty, when he joined the Soviet Army. He trained at VSS Spartak, coached by Grigory Nikiforov.Bolotnikov won his first national championship title in 10,000 m in 1957, when he surprisingly beat the great Vladimir Kuts in a finishing straight by 0.2 seconds. He became the double Soviet champion in 5000 m and 10,000 m from 1958 to 1962. He also won the national 10,000 m title in 1964 and national cross country title in 1958. In 1959 he became the Honoured Master of Sports of the USSR.Bolotnikov participated already at the 1956 Summer Olympics, but without any success. At the Rome Olympics in 1960, Bolotnikov controlled the 10,000 m race from the start to end, beating the main favourites Hans Grodotzki from East Germany and Murray Halberg from New Zealand by five seconds. On 5 October that year, in Kiev, Bolotnikov lowered the 10,000 metres world record by almost twelve seconds to 28:18.8.Just two weeks before the 1962 European Championships in Belgrade, on 11 August 1962 in Moscow, Bolotnikov lowered his own 10,000 m world record by 0.6 seconds to 28:18.2, thus becoming the main favourite at long distances at the Championships. He easily won the 10,000 m run, but was surprisingly beaten to third in 5,000 m. After the unsuccessful 1964 Summer Olympics, Bolotnikov decided to retire from athletics in 1965. He received the Order of Lenin in 1960.Bolotnikov died on 20 December 2013, at the age of 83. 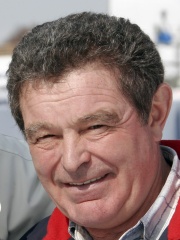 With an HPI of 51.71, Vyacheslav Vedenin is the 8th most famous Russian Athlete.  His biography has been translated into 17 different languages.

Vyacheslav Petrovich Vedenin (Russian: Вячесла́в Петро́вич Веденин; 1 October 1941 – 22 October 2021) was a Soviet cross-country skier. His silver medal over 50 km was the only medal won by a Soviet male skier at the 1968 Olympics, as his 4×10 km team placed fourth. At the next Olympics he was the Olympic flag bearer for the Soviet Union and won three medals, with golds in the 30 km and 4×10 km and a bronze in the 50 km. In the 4×10 km event Vedenin ran the last leg and won by 10 seconds, despite starting with a one-minute lag from Norway. His gold in the 30 km was the first individual win for a Soviet male skier at the Winter Olympics.Vedenin also won three medals at the 1970 World Championships with two golds (30 km, 4x10 km) and one silver (50 km). After retiring from competitions he coached skiers at Dynamo Moscow, for which he competed through his entire career.Vedenin was awarded the Order of the Red Banner of Labour (1970) and Order of Lenin (1972). Since 1989 a competition "Vedenin's Ski Track" («Лыжня Веденина») is held yearly in Dubna, Dubensky District, in his honor.Vedenin had two sons, Vyacheslav and Andrey. Vyacheslav is an international skiing referee who worked at the 2014 Winter Olympics and also took Olympic Oath on behalf of officials. Andrei is a former biathlon competitor. 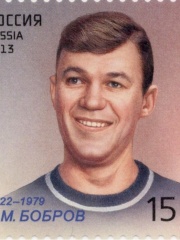 With an HPI of 51.61, Vsevolod Bobrov is the 9th most famous Russian Athlete.  His biography has been translated into 30 different languages.

Vsevolod Mikhailovich Bobrov (Russian: Все́волод Миха́йлович Бобро́в, IPA: [ˈfsʲevələd bɐˈbrof]; 1 December 1922 – 1 July 1979) was a Soviet athlete, who excelled in football, bandy and ice hockey. He is considered one of the best Russians ever in each of those sports.Originally a football player, he played for CDKA Moscow, VVS Moscow, and Spartak Moscow, and represented the Soviet Union internationally at the 1952 Summer Olympics. After he quit football in 1953 he turned to ice hockey, which he had taken up when it was started in the Soviet Union in 1946. He was one of the first ice hockey players in the Soviet Union, and joined CDKA Moscow, playing for them and VVS Moscow before retiring in 1957. A leading scorer in the Soviet League, Bobrov was one of three players to average more than two goals per game over their career, with the other two players (Alexei Guryshev and Viktor Shuvalov) his linemates. Internationally he participated with the Soviet national team at several World Championships, including their first tournament in 1954, as well as the 1956 Winter Olympics, where the Soviets won the gold medal.After his playing career, Bobrov coached both football and ice hockey. He coached the Soviet national team in ice hockey, most notably during the 1972 Summit Series against Canada. A renowned athlete, he was inducted into the International Ice Hockey Federation Hall of Fame when it was founded in 1997. The Kontinental Hockey League (KHL), a Russian-based league, has one of its four divisions named after Bobrov. 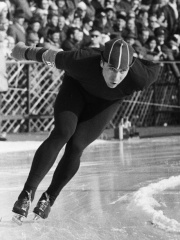 With an HPI of 51.32, Yevgeny Grishin is the 10th most famous Russian Athlete.  His biography has been translated into 25 different languages.

Yevgeny Romanovich Grishin (Russian: Евгений Романович Гришин; 23 March 1931 – 9 July 2005) was a Soviet and Russian speedskater. Grishin trained for the largest part of his speedskating career at CSKA Moscow. He became European Champion in 1956, and won Olympic gold in the 500 meter and 1500 meter events in both 1956 and 1960 Winter Olympics (sharing the 1500 meter victories with respectively Yuri Mikhaylov and Roald Aas), competing for the USSR team. Along with his compatriot Lidiya Skoblikova, he was the most successful athlete at the 1960 Winter Olympics.Grishin was the first to break the 40 second barrier on the 500 m, skating 39.6 in an unofficial test race in Squaw Valley in 1960, just after the Winter Olympic Games at the same location. Three years later, on 27–28 January 1963, he set officially ratified world records 39.6 and 39.5 at the Medeu track. He also won 2 bronze medals in the World Championships, in 1954 and 1956.He had 12 single distance wins in his 14 starts in allround championships. Over the course of his career Grishin set seven world records; the 1:22.8 time of the 1000 m lasted 12 years.

Pantheon has 313 people classified as athletes born between 1914 and 1999. Of these 313, 255 (81.47%) of them are still alive today. The most famous living athletes include Yelena Isinbayeva, Elvīra Ozoliņa, and Vera Krepkina. The most famous deceased athletes include Yuriy Sedykh, Vasily Alekseyev, and Valeriy Brumel. As of April 2022, 80 new athletes have been added to Pantheon including Vyacheslav Vedenin, Veikko Karvonen, and Valeri Popenchenko.

Which Athletes were alive at the same time? This visualization shows the lifespans of the 25 most globally memorable Athletes since 1700.