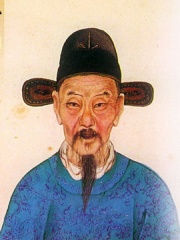 Zhang Juzheng (Chinese: 張居正; pinyin: Zhāng Jūzhèng; 1525–1582), courtesy name Shuda (Chinese: 叔大; pinyin: Shūdà), pseudonym Taiyue (Chinese: 太岳; pinyin: Tàiyuè), was a Chinese politician who served as Grand Secretary (Chinese: 首輔; pinyin: Shǒufǔ) in the late Ming dynasty during the reigns of the Longqing and Wanli emperors. He represented what might be termed the "new Legalism", aiming to ensure that the gentry worked for the state. Alluding to performance evaluations, he said: "Everyone is talking about real responsibility, but without a clear reward and punishment system, who is going to risk life and hardship for the country?" One of his chief goals was to reform the gentry and rationalize the bureaucracy together with his political rival Gao Gong, who was concerned that offices were providing income with little responsibility. Read more on Wikipedia

Among politicians, Zhang Juzheng ranks 5,938 out of 15,710. Before him are Aretas IV Philopatris, Guillaume de Chartres, Isabella of Savoy, Adelaide of Paris, Emperor Ninmyō, and Maurice, Landgrave of Hesse-Kassel. After him are Étienne de Silhouette, Amar-Sin, Boris Pugo, Prince Louis Ferdinand of Prussia, Brian Cowen, and Charles August, Crown Prince of Sweden.

Among people born in 1525, Zhang Juzheng ranks 8. Before him are Nurbanu Sultan, Şehzade Bayezid, Carolus Clusius, John George, Elector of Brandenburg, Giovanni Battista Moroni, and Hans Staden. After him are Germain Pilon and John Albert I, Duke of Mecklenburg. Among people deceased in 1582, Zhang Juzheng ranks 10. Before him are Wu Cheng'en, Akechi Mitsuhide, Altan Khan, Takeda Katsuyori, Mori Ranmaru, and Diego, Prince of Asturias. After him are Charlotte of Bourbon, Oda Nobutada, Francisco de Toledo, and George Buchanan.