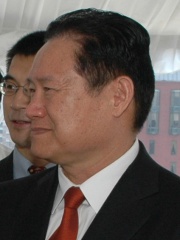 Zhou Yongkang (born 3 December 1942) is a former senior leader of the Chinese Communist Party (CCP). He was a member of the 17th Politburo Standing Committee (PSC), China's highest decision-making body, and the Secretary of the Central Political and Legal Affairs Commission (Zhengfawei) between 2007 and 2012, making him one of the most powerful leaders in China. In that position, Zhou oversaw China's security apparatus and law enforcement institutions, with power stretching into courts, prosecution agencies, police forces, paramilitary forces, and intelligence organs. Read more on Wikipedia

Among politicians, Zhou Yongkang ranks 7,404 out of 15,710. Before him are Andronikos Doukas, Oliviero Carafa, Floris I, Count of Holland, Odoardo Farnese, Hereditary Prince of Parma, Gertrude of Saxony, and Dragoș, Voivode of Moldavia. After him are Ali ibn Hammud al-Nasir, Shams Pahlavi, Leszek II the Black, Tudor Vladimirescu, Elisabetta Gonzaga, and Arturo Frondizi.