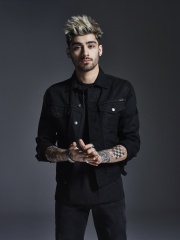 Zain Javadd Malik (; born 12 January 1993), known mononymously as Zayn, is an English singer and songwriter. Born and raised in Bradford, Malik auditioned as a solo contestant for the British music competition The X Factor in 2010. After being eliminated as a solo performer, Malik was brought back into the competition, along with four other contestants, to form the boy band One Direction. Read more on Wikipedia

Since 2007, the English Wikipedia page of Zayn Malik has received more than 22,988,730 page views. His biography is available in 53 different languages on Wikipedia making him the 1,425th most popular musician.

Hollywood Life
Gigi Hadid Reveals Big Bare Baby Bump As She Preps To Give Birth To Her Baby With Zayn Malik — See Pics
While Gigi Hadid is due to give birth any day now, she's giving fans a look at how her bare baby bump looked in a crop top at her pregnancy's six month mark in gorgeous photos.
bshilliday