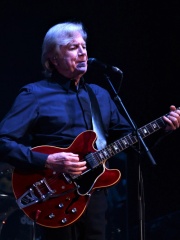 Justin David Hayward (born 14 October 1946, in Swindon, Wiltshire) is an English musician best known as songwriter, lead singer, and guitarist of the rock band The Moody Blues. Hayward became the group's principal lead guitarist and vocalist over the 1967–1974 period, and the most prolific songwriter and composer of several international hit singles for the band. Hayward wrote singles for the Moody Blues including "Nights in White Satin", "Tuesday Afternoon", "Voices in the Sky", "Never Comes the Day", "Question", "The Story in Your Eyes", "Driftwood", "The Voice", "Blue World", "Your Wildest Dreams", "I Know You're Out There Somewhere" and "English Sunset"; in all, writing 20 of the group's 27 post-1967 singles. Read more on Wikipedia