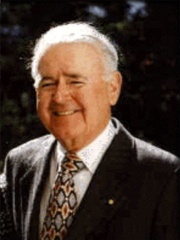 Sir William Patrick Deane (born 4 January 1931) is an Australian barrister and jurist who served as the 22nd Governor-General of Australia, in office from 1996 to 2001. He was previously a Justice of the High Court of Australia from 1982 to 1995. Deane received his undergraduate education at the University of Sydney, and later studied international law at The Hague Academy of International Law in the Netherlands. Read more on Wikipedia

Among politicians, William Deane ranks 13,280 out of 15,710. Before him are Mahmud Shah Durrani, Alfred Raoul, Androulla Vassiliou, Vitali Davydov, Ruth Perry, and Miguel Arias Cañete. After him are Theodotus I of Constantinople, William Barr, Israel Katz, Galina Starovoytova, Hans Eichel, and József Sákovics.