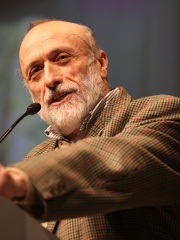 Carlo Petrini (born 22 June 1949), born in the in the commune of Bra, province of Cuneo, Italy, is the founder of the International Slow Food Movement. He first came to prominence in the 1980s for taking part in a campaign against the fast food chain McDonald's opening near the Spanish Steps in Rome. In 1983, he helped to create and develop the Italian non-profit food and wine association known as Arcigola.Petrini was formerly a political activist in the communist Proletarian Unity Party (Partito di Unità Proletaria; PdUP). Read more on Wikipedia