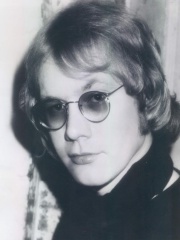 Warren William Zevon (; January 24, 1947 – September 7, 2003) was an American rock singer-songwriter and musician. Zevon's most famous compositions include "Werewolves of London", "Lawyers, Guns and Money", and "Roland the Headless Thompson Gunner", all of which are featured on his third album, Excitable Boy (1978), whose title track is also well-known. He also wrote major hits that were recorded by other artists, including "Poor Poor Pitiful Me", "Accidentally Like a Martyr", "Mohammed's Radio", "Carmelita", and "Hasten Down the Wind". Read more on Wikipedia

Since 2007, the English Wikipedia page of Warren Zevon has received more than 2,651,060 page views. His biography is available in 18 different languages on Wikipedia making him the 1,442nd most popular musician.

Among musicians, Warren Zevon ranks 1,445 out of 2,258. Before him are Red Mitchell, Rick Danko, Rick J. Jordan, Chris Poland, John Taylor, and Boz Burrell. After him are John Sebastian, Mark Lanegan, Mauro Maur, Arthur Lee, The Rev, and Avishai Cohen.