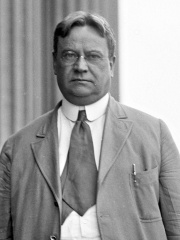 Hiram Warren Johnson (September 2, 1866 – August 6, 1945) was initially a leading American progressive and then a Liberal Isolationist Republican politician from California. He served as the 23rd Governor of California from 1911 to 1917 and as a United States Senator from 1917 to 1945. Read more on Wikipedia

Since 2007, the English Wikipedia page of Hiram Johnson has received more than 278,619 page views. His biography is available in 16 different languages on Wikipedia making him the 13,326th most popular politician.