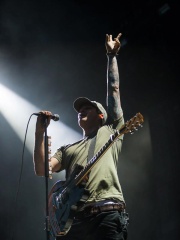 Thomas Matthew DeLonge () (born December 13, 1975) is an American musician, singer, songwriter, author, record producer, actor, and filmmaker. Possessing a distinctive nasal singing voice, he is the lead vocalist and guitarist of the rock band Angels & Airwaves, which he formed in 2005, and was the co-lead vocalist, guitarist, and co-founder of the rock band Blink-182 from its formation in 1992 until his dismissal from the group in 2015. DeLonge grew up in the suburbs of Poway, California, where he embraced skateboarding at an early age. Read more on Wikipedia

Since 2007, the English Wikipedia page of Tom DeLonge has received more than 5,157,446 page views. His biography is available in 39 different languages on Wikipedia making him the 1,489th most popular musician.