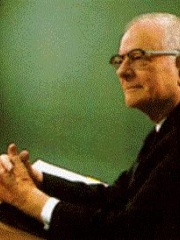 William Edwards Deming (October 14, 1900 – December 20, 1993) was an American engineer, statistician, professor, author, lecturer, and management consultant. Educated initially as an electrical engineer and later specializing in mathematical physics, he helped develop the sampling techniques still used by the U.S. Department of the Census and the Bureau of Labor Statistics. In his book The New Economics for Industry, Government, and Education Deming championed the work of Walter Shewhart, including statistical process control, operational definitions, and what Deming called the "Shewhart Cycle," which had evolved into Plan-Do-check-Act (PDCA). Read more on Wikipedia

Since 2007, the English Wikipedia page of W. Edwards Deming has received more than 1,837,371 page views. His biography is available in 33 different languages on Wikipedia making him the 48th most popular economist.