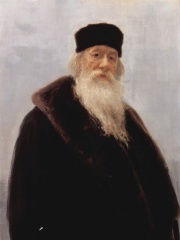 Vladimir Vasilievich Stasov (sometimes transliterated as Stassov; Russian: Влади́мир Васи́льевич Ста́сов; 14 January [O.S. 2 January] 1824, in Saint Petersburg – 23 October [O.S. 10 October] 1906, in Saint Petersburg), son of Russian architect Vasily Petrovich Stasov (1769–1848), was probably the most respected Russian critic during his lifetime. He graduated from the School of Jurisprudence in 1843, was admitted to the Imperial Academy of Arts in 1859, and was made honorary fellow of the Russian Academy of Sciences in 1900, together with his friend Leo Tolstoy. Stasov became a prominent figure in mid-19th-century Russian culture. Read more on Wikipedia

Among writers, Vladimir Stasov ranks 2,294 out of 5,794. Before him are Matthieu Ricard, Frederick Marryat, Liu Cixin, Vasko Popa, Asclepiades of Samos, and Dick Francis. After him are Paschasius Radbertus, Sextus Pompeius Festus, Fujiwara no Teika, Petar Kočić, Camilo Castelo Branco, and David Gemmell.