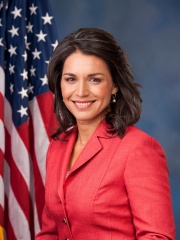 Tulsi Gabbard (; born April 12, 1981) is an American politician and Hawaii Army National Guard officer who serves as the U.S. Representative for Hawaii's 2nd congressional district. Elected in 2012, she is the first Hindu member of Congress and also the first Samoan-American voting member of Congress. She was a candidate for the Democratic nomination in the 2020 United States presidential election.In 2002, Gabbard was elected to the Hawaii House of Representatives. Read more on Wikipedia

Since 2007, the English Wikipedia page of Tulsi Gabbard has received more than 13,253,134 page views. Her biography is available in 33 different languages on Wikipedia making her the 13,944th most popular politician.