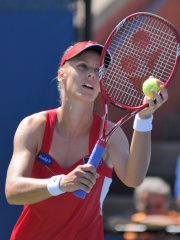 Elena Viacheslavovna Dementieva (Russian: Еле́на Вячесла́вовна Деме́нтьева, [jɪˈlʲɛnə dʲɪˈmʲenʲtʲjɪvə] (listen); born 15 October 1981) is a Russian former professional tennis player. She won the singles gold medal at the 2008 Olympics in Beijing, having previously won the silver medal at the 2000 Olympics in Sydney. She won 16 WTA singles titles, reached the finals of the 2004 French Open and 2004 US Open and reached seven other Grand Slam semifinals. Read more on Wikipedia

Since 2007, the English Wikipedia page of Elena Dementieva has received more than 387,345 page views. Her biography is available in 46 different languages on Wikipedia making her the 262nd most popular tennis player.

Among TENNIS PLAYERS In Russia