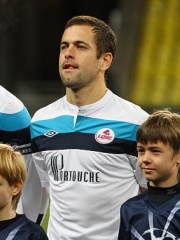 Joseph John Cole (born 8 November 1981) is an English football coach and former professional footballer who played as an attacking midfielder or winger in the Premier League, Ligue 1, League One and United Soccer League. Cole started his career with West Ham United, where, after breaking into the first team in January 1999, he played more than 120 Premier League games over five seasons. He was one of a number of players who left West Ham in the summer of 2003, after the club had been relegated to the Football League First Division, with Cole signing for Chelsea. Read more on Wikipedia