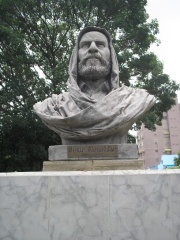 ʿOmar al-Mukhṭār Muḥammad bin Farḥāṭ al-Manifī (Arabic: عُمَر الْمُخْتَار مُحَمَّد بِن فَرْحَات الْمَنِفِي‎; 20 August 1858 – 16 September 1931), called The Lion of the Desert, known among the colonial Italians as Matari of the Mnifa, was the leader of native resistance in Cyrenaica, currently Eastern Libya under the Senussids, against the Italian colonization of Libya. A teacher-turned-general, Omar was also a prominent figure of the Senussi movement, and he is considered the national hero of Libya and a symbol of resistance in the Arab and Islamic worlds. Beginning in 1911, he organised and, for nearly twenty years, led the Libyan resistance movement against the colonial Italians during the Pacification of Libya. Read more on Wikipedia

Since 2007, the English Wikipedia page of Omar Mukhtar has received more than 668,152 page views. His biography is available in 41 different languages on Wikipedia making him the 46th most popular social activist.

Among SOCIAL ACTIVISTS In Libya