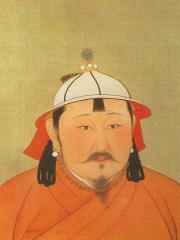 Temür Öljeytü Khan (Mongolian: Өлзийт Төмөр, romanized: Ölziit Tömör; Middle Mongolian: ᠥᠯᠵᠡᠶᠢᠲᠦ ᠲᠡᠮᠦᠷ, Öljeyitü Temür), born Temür (also spelled Timur, Mongolian: Төмөр, October 15, 1265 – February 10, 1307), also known by the temple name Chengzong (Emperor Chengzong of Yuan; Chinese: 元成宗; pinyin: Yuán Chéngzōng; Wade–Giles: Yüan2 Ch'eng2-tsung1) was the second emperor of the Yuan dynasty, ruling from May 10, 1294 to February 10, 1307. Apart from Emperor of China, he is considered as the sixth Great Khan of the Mongol Empire or Mongols, although it was only nominal due to the division of the empire. He was an able ruler of the Yuan, and his reign established the patterns of power for the next few decades. Read more on Wikipedia

Among politicians, Temür Khan ranks 1,741 out of 15,710. Before him are Constans, Henry, King of Portugal, William V, Prince of Orange, Maria II of Portugal, Zhengde Emperor, and Jehoash of Judah. After him are Vigdís Finnbogadóttir, Shepseskaf, Frederick Augustus I of Saxony, Athalaric, Theophanu, and Achaemenes.

Among people born in 1265, Temür Khan ranks 4. Before him are Dante Alighieri, Duns Scotus, and Beatrice Portinari. After him are Andrew III of Hungary, Alfonso III of Aragon, Henry of Bohemia, Emperor Fushimi, Lucia, Countess of Tripoli, Ramon Muntaner, María de Molina, and Otto III, Duke of Carinthia. Among people deceased in 1307, Temür Khan ranks 2. Before him is Edward I of England. After him are Fra Dolcino, Rudolf I of Bohemia, Anna of Hohenstaufen, Catherine I, Latin Empress, Hethum II, King of Armenia, Duwa, and Joan of Acre.