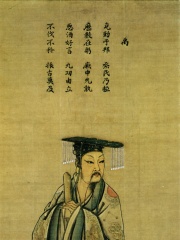 Yu the Great (大禹) was a legendary king in ancient China who was famed for his introduction of flood control, his establishment of the Xia dynasty which inaugurated dynastic rule in China, and his upright moral character. He figures prominently in the Chinese legend of "Great Yu Who Controlled the Waters" (Chinese: 大禹治水; pinyin: Dà Yǔ Zhì Shuǐ). The dates which have been proposed for Yu's reign predate the oldest-known written records in China, the oracle bones of the late Shang dynasty, by nearly a millennium. Read more on Wikipedia

Yu the Great is most famous for his work in controlling the flooding of the Yellow River.

Page views of Yu the Greats by language

Among politicians, Yu the Great ranks 1,800 out of 15,710. Before him are Amalric of Jerusalem, Rastislav of Moravia, Michael VI Bringas, Sirimavo Bandaranaike, Princess Sibylla of Saxe-Coburg and Gotha, and Michael V Kalaphates. After him are Fanny Kaplan, Sanakht, Carloman, Archduchess Maria Elisabeth of Austria, Publius Clodius Pulcher, and James IV of Scotland.