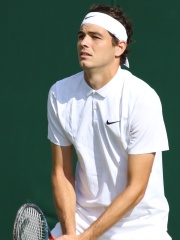 Taylor Harry Fritz (born October 28, 1997) is an American professional tennis player. He reached an ATP final in his third career event, the 2016 Memphis Open. Only one other American has reached an ATP final in fewer career events.His mother Kathy May Fritz was a top-10 player, and his father Guy Henry Fritz also played professional tennis and was named US Olympic Development Coach of the Year 2016.He reached the finals in boys' singles at the 2015 French Open and lost to fellow American Tommy Paul in three sets. Read more on Wikipedia

Since 2007, the English Wikipedia page of Taylor Fritz has received more than 968,690 page views. His biography is available in 19 different languages on Wikipedia making him the 868th most popular tennis player.