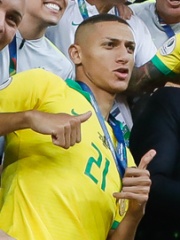 Richarlison de Andrade (born 10 May 1997), known mononymously as Richarlison (Brazilian Portuguese: [hiˈʃaʁl(i)sõ]), is a Brazilian professional footballer who plays as a forward for Premier League club Tottenham Hotspur and the Brazil national team. He began his professional career with América Mineiro in 2015, winning promotion from the Campeonato Brasileiro Série B in his only season before transferring to Fluminense. He totalled 67 matches and 19 goals in his two years there and was named in the Team of the Season when the club finished as runners-up in the 2017 Campeonato Carioca. Read more on Wikipedia

Page views of Richarlisons by language