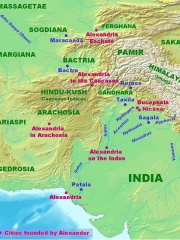 Taxiles (in Greek Tαξίλης or Ταξίλας; lived 4th century BC) was the Greek chroniclers' name for the prince (later king) who reigned over the tract between the Indus and the Jhelum (Hydaspes) Rivers in the Punjab region of the Indian subcontinent at the time of Alexander the Great's expedition. Read more on Wikipedia

Page views of Taxiles by language

Among politicians, Taxiles ranks 8,352 out of 15,710. Before him are Margaret of England, Osorkon IV, Pellegrino Rossi, Djehuti, William A. Wheeler, and Jacques Laffitte. After him are Archduchess Eleanor of Austria, Princess Feodora of Saxe-Meiningen, Chiang Fang-liang, Pribislav of Mecklenburg, Lucius Julius Caesar, and Acrotatus II.

Among people born in 400 BC, Taxiles ranks 62. Before him are Crates of Athens, Antimachus, Agnodice, Aeneas Tacticus, Lucius Cornelius Scipio Barbatus, and Timotheus. After him are Acrotatus II, Meleager, King Xian of Zhou, Antipater Etesias, Erinna, and Artabazos II. Among people deceased in 360 BC, Taxiles ranks 12. Before him are Aeschines of Sphettus, Lais of Corinth, Bryaxis, Anniceris, Polykleitos the Younger, and Agnodice. After him are Artabazos II, Philitas of Cos, Aristides of Thebes, Laomedon of Mytilene, Stasanor, and Lucius Aemilius Barbula.