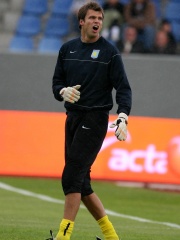 Stuart James Taylor (born 28 November 1980) is an English former professional footballer who played as a goalkeeper. Taylor began his career with Arsenal, winning the 2001–02 Premier League and 2002–03 FA Cup and representing England at under-16, under-18, under-20 and under-21 level. He was spoken of as a future replacement for Arsenal and England goalkeeper David Seaman but after other goalkeepers were signed, he struggled to get playing time after 2003 and he joined Aston Villa in 2005.Initially second-choice behind Thomas Sørensen, Taylor was again supplanted by other keepers and pushed down the pecking order. Read more on Wikipedia