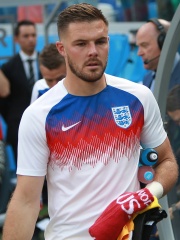 Jack Butland (born 10 March 1993) is an English professional footballer who plays as a goalkeeper for Premier League club Crystal Palace and the England national team. Butland began his career with Birmingham City, and made his debut in the Football League in September 2011 while on loan to League Two club Cheltenham Town. Butland established himself as first choice keeper at St Andrew's in 2012–13 and was transferred to Premier League club Stoke City in January 2013 for a fee of £3.3 million. Read more on Wikipedia

Since 2007, the English Wikipedia page of Jack Butland has received more than 1,498,299 page views. His biography is available in 37 different languages on Wikipedia making him the 7,374th most popular soccer player.