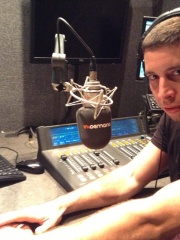 Elliot John Gleave (born 20 June 1982), better known by his stage name Example, is an English musician, singer, songwriter, rapper and record producer. His name arose due to his initials being E.G., which is an abbreviation of the Latin phrase exempli gratia ("for example").Example first found success with the release of his second studio album, Won't Go Quietly, which peaked at number four on the UK Albums Chart and peaked at number one on the UK Dance Chart. and followed his debut album "What We Made" which was heavily hip-hop influenced due to Example only knowing a hip-hop record producer at the time. Read more on Wikipedia

Since 2007, the English Wikipedia page of Example has received more than 470,247 page views. His biography is available in 28 different languages on Wikipedia making him the 2,446th most popular singer.

Page views of Examples by language

Among singers, Example ranks 2,460 out of 3,001. Before him are Lacey Sturm, Pitty, Ai Takahashi, Masha Katz, E-40, and Sasha Song. After him are Too Short, Guy Sebastian, Marta Roure, Nam Woo-hyun, Pablo Ruiz, and Russian Red.