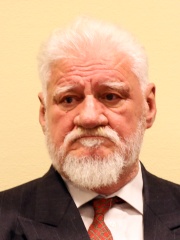 Slobodan Praljak (Croatian pronunciation: [slobǒdan prǎːʎak]; 2 January 1945 – 29 November 2017) was a Bosnian Croat general who served in the Croatian Army and the Croatian Defence Council, an army of the Croatian Republic of Herzeg-Bosnia, between 1992 and 1995. Praljak was found guilty of committing violations of the laws of war, crimes against humanity and breaches of the Geneva Conventions during the Croat–Bosniak War by the International Criminal Tribunal for the former Yugoslavia (ICTY) in 2017.Praljak voluntarily joined the newly formed Croatian Armed Forces after the outbreak of the Croatian War of Independence in 1991. Before and after the war he was an engineer, a television and theatre director, as well as a businessman. Read more on Wikipedia

Since 2007, the English Wikipedia page of Slobodan Praljak has received more than 1,405,322 page views. His biography is available in 42 different languages on Wikipedia making him the 264th most popular military personnel.

Most Popular MILITARY PERSONNELS in Wikipedia