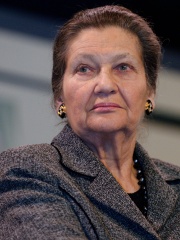 Simone Veil (French: [simɔn vɛj] (listen); née Jacob; 13 July 1927 – 30 June 2017) was a French magistrate and politician who served as Health Minister in several governments and was President of the European Parliament from 1979 to 1982, the first woman to hold that office. As health minister, she is best remembered for advancing women’s rights in France, in particular for the 1975 law that legalized abortion, today known as Loi Veil. Read more on Wikipedia

Simone Veil was a French politician and lawyer. She was the first woman to serve as Minister of Health in France. She is most famous for the 1975 law legalizing abortion in France.

Among politicians, Simone Veil ranks 2,356 out of 15,710. Before her are Kim Koo, Archduchess Maria Anna of Austria, Afonso VI of Portugal, Fumimaro Konoe, Mohammad Ali Shah Qajar, and Benazir Bhutto. After her are Theobald von Bethmann-Hollweg, Princess Louise Auguste of Denmark, Berengar II of Italy, Robert I, Duke of Parma, Birger Jarl, and Louis I, Duke of Anjou.