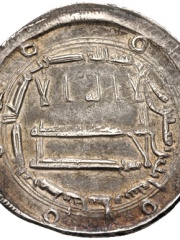 Abu Abdallah Muhammad ibn Abdallah al-Mansur (Arabic: أبو عبد الله محمد بن عبد الله المنصور‎; 744 or 745 – 785), better known by his regnal name al-Mahdi (المهدي, "He who is guided by God"), was the third Abbasid Caliph who reigned from 775 to his death in 785. Read more on Wikipedia

Since 2007, the English Wikipedia page of Al-Mahdi has received more than 271,584 page views. His biography is available in 34 different languages on Wikipedia. Al-Mahdi is the 1,508th most popular politician (up from 1,640th in 2019), the 5th most popular biography from Jordan (down from 4th in 2019) and the 3rd most popular Jordanian Politician.

The Mahdi is a messianic figure in Islam. He is believed to be the savior of humankind and the final Imam who will appear at the end of time.

Page views of Al-Mahdis by language

Among politicians, Al-Mahdi ranks 1,508 out of 15,710. Before him are Agathocles of Syracuse, Wenceslaus II of Bohemia, Tvrtko I of Bosnia, Phryne, Romanos III Argyros, and Manuel Azaña. After him are Princess Stéphanie of Belgium, Bleda, Conradin, Andrey Vyshinsky, Chenghua Emperor, and Emmanuel Macron.