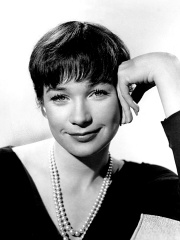 Shirley MacLaine (born Shirley MacLean Beaty; April 24, 1934) is an American film, television, and theater actress, singer, dancer, activist, and author. MacLaine's film career started in 1955 in Alfred Hitchcock's classic thriller The Trouble With Harry. MacLaine was nominated for the Academy Award for Best Actress for her performances in Some Came Running (1958), The Apartment (1960), Irma la Douce (1963), and The Turning Point (1977), before finally winning for Terms of Endearment (1983). Read more on Wikipedia

Since 2007, the English Wikipedia page of Shirley MacLaine has received more than 6,661,982 page views. Her biography is available in 66 different languages on Wikipedia making her the 139th most popular actor.