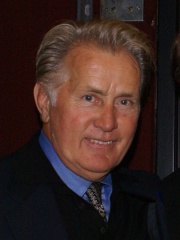 Ramón Antonio Gerardo Estévez (born August 3, 1940), known professionally as Martin Sheen, is an American actor. He first became known for his roles in the films The Subject Was Roses (1968) and Badlands (1973), and later achieved wide recognition for his leading role as Captain Benjamin Willard in Apocalypse Now (1979), as U.S. President Josiah Bartlet in the television series The West Wing (1999–2006), and as Robert Hanson in the Netflix television series Grace and Frankie (2015–2022). In film, Sheen has won the Best Actor award at the San Sebastián International Film Festival for his performance as Kit Carruthers in Badlands. Read more on Wikipedia

Martin Sheen is most famous for his role as President Josiah Bartlet in the television series The West Wing.