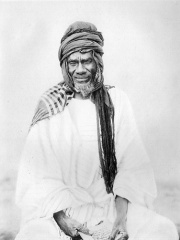 Samory Toure (c. 1828 – June 2, 1900), also known as Samori Toure, Samory Touré, or Almamy Samore Lafiya Toure, was a Muslim cleric, a military strategist, and the founder and leader of the Wassoulou Empire, an Islamic empire that was in present-day north and south-eastern Guinea and included part of north-eastern Sierra Leone, part of Mali, part of northern Côte d'Ivoire and part of southern Burkina Faso. Samori Ture was a deeply religious Muslim of the Maliki jurisprudence of Sunni Islam. Toure resisted French colonial rule in West Africa from 1882 until his capture in 1898. Read more on Wikipedia

Among politicians, Samori Ture ranks 5,833 out of 15,577. Before him are Emperor Heizei, Vasil Kolarov, Prince Louis Ferdinand of Prussia, Hugh III, Duke of Burgundy, Leopoldo Calvo-Sotelo, and Frederick IV, Duke of Swabia. After him are Tigranes I, Stefan Czarniecki, Domnall mac Ailpín, Tahir ibn Husayn, Louis IV, Landgrave of Thuringia, and Xanthippus.

Among POLITICIANS In Guinea