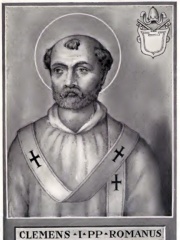 Clement of Rome (Latin: Clemens Romanus; Greek: Ancient Greek: Κλήμης Ῥώμης, romanized: Klēmēs Rōmēs; died 99) was a leader in the church of Rome in the late first century AD. He is listed by Irenaeus and Tertullian as the bishop of Rome, holding office from 88 AD to his death in 99 AD. In the Catholic Church, he is regarded as the third pope as Clement I. He is considered to be the first Apostolic Father of the Church, one of the three chief ones together with Polycarp and Ignatius of Antioch.Few details are known about Clement's life. Clement was said to have been consecrated by Peter the Apostle, and he is known to have been a leading member of the church in Rome in the late 1st century. Early church lists place him as the second or third bishop of Rome after Peter. Read more on Wikipedia

Pope Clement I is most famous for being the first pope.

Page views of Pope Clement IS by language