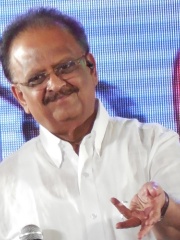 Sripathi Panditaradhyula Balasubrahmanyam (born 4 June 1946; also referred to as S. P. Bala, S. P. B., or Balu) is an Indian musician, playback singer, music director, actor, dubbing artist and film producer who worked predominantly in Telugu, Tamil, Kannada, Hindi and Malayalam. He has recorded over 40,000 songs in 16 Indian languages. He holds the Guinness World Record for recording the highest number of songs by a singer with over 40,000 songs. Read more on Wikipedia

Since 2007, the English Wikipedia page of S. P. Balasubrahmanyam has received more than 4,270,714 page views. His biography is available in 20 different languages on Wikipedia making him the 1,521st most popular singer.