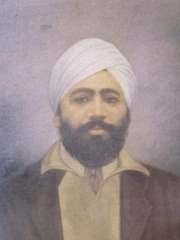 Udham Singh (26 December 1899 – 31 July 1940) was an Indian revolutionary belonging to the Ghadar Party, best known for his assassination in London of Michael O'Dwyer, the former lieutenant governor of the Punjab in India, on 13 March 1940. The assassination was done in revenge for the Jallianwala Bagh massacre in Amritsar in 1919, for which O'Dwyer was responsible. Singh was subsequently tried and convicted of murder and hanged in July 1940. Read more on Wikipedia

Since 2007, the English Wikipedia page of Udham Singh has received more than 1,506,448 page views. His biography is available in 16 different languages on Wikipedia making him the 272nd most popular social activist.

Among social activists, Udham Singh ranks 271 out of 426. Before him are Abbie Hoffman, Donald Watson, Gunnar Sønsteby, Nimr al-Nimr, Emmett Till, and Flora MacDonald. After him are Toyohiko Kagawa, Kate Sheppard, Louise Bryant, Clara Barton, Toktogul Satylganov, and Black Elk.