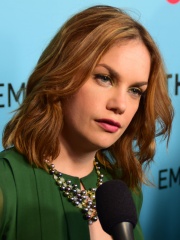 Ruth Wilson (born 13 January 1982) is an English actress. She is known for her performances as the eponymous protagonist in Jane Eyre (2006), as Alice Morgan in the BBC psychological crime drama Luther (2010–2013, 2019), as Alison Lockhart in the Showtime drama The Affair (2014–2018), and as the titular character in Mrs Wilson (2018). Since 2019, she has portrayed Marisa Coulter in the BBC/HBO fantasy series His Dark Materials, and for this role she won the 2020 BAFTA Cymru Award for Best Actress. Read more on Wikipedia

Among actors, Ruth Wilson ranks 5,499 out of 10,030. Before her are Paul McGann, AnnaSophia Robb, Tracey Walter, Joshua Jackson, Ge You, and Richard Masur. After her are Adam Arkin, Anne Dorval, Amy Acker, Violante Placido, Roger Allam, and Marguerite Clark.