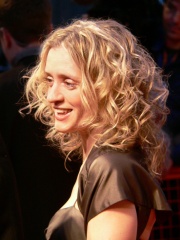 Anne-Marie Duff (born 8 October 1970) is an English actress and narrator. After graduating from Drama Centre London, Duff made appearances in Trial & Retribution, Amongst Women and Aristocrats in the late 1990s. Read more on Wikipedia

Since 2007, the English Wikipedia page of Anne-Marie Duff has received more than 4,892,124 page views. Her biography is available in 20 different languages on Wikipedia making her the 4,241st most popular actor.