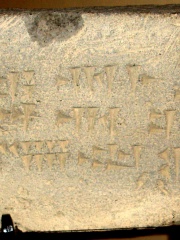 Rusa III was king of Urartu. He was called "Son of Erimena," meaning that he was probably a brother of Rusa II. Little is known about his reign; his name was inscribed on a massive granary at Armavir and on a series of bronze shields from the temple of Khaldi found at Rusahinili, now held in the British Museum. Read more on Wikipedia

Since 2007, the English Wikipedia page of Rusa III has received more than 10,819 page views. His biography is available in 16 different languages on Wikipedia making him the 8,499th most popular politician.

Among politicians, Rusa III ranks 8,466 out of 14,801. Before him are Isagoras, Dorothea of Schleswig-Holstein-Sonderburg-Glücksburg, Neferkare, ninth dynasty, Decentius, Morteza Motahhari, and Dara Shukoh. After him are Demetrius III Eucaerus, Béni Kállay, Manuel Zelaya, Paolo Renier, Pinedjem II, and George II of Bulgaria.

Others Deceased in 585 BC