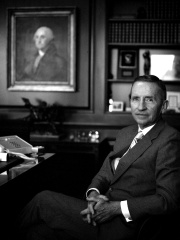 Henry Ross Perot (; born Henry Ray Perot; June 27, 1930 – July 9, 2019) was an American business magnate, billionaire, philanthropist, and politician. He was the founder and chief executive officer of Electronic Data Systems and Perot Systems. He ran an independent presidential campaign in 1992 and a third-party campaign in 1996, establishing the Reform Party in the latter election. Read more on Wikipedia

Since 2007, the English Wikipedia page of Ross Perot has received more than 6,281,193 page views. His biography is available in 32 different languages on Wikipedia making him the 7,506th most popular politician.

Among politicians, Ross Perot ranks 7,463 out of 14,801. Before him are Jungcheon of Goguryeo, Hamida Djandoubi, Letsie III of Lesotho, Tommaso Mocenigo, Fatali Khan Khoyski, and Hyperbolus. After him are Manuel I of Trebizond, Girolamo Aleandro, Damat Ferid Pasha, Wifred II, Count of Barcelona, Telets of Bulgaria, and Bernd Rosemeyer.