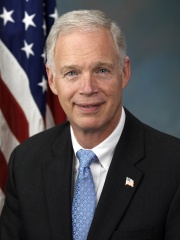 Ronald Harold Johnson (born April 8, 1955) is an American businessman and politician serving as the senior United States Senator for Wisconsin. He is a member of the Republican party. Johnson was first elected to the Senate in 2010, defeating Democratic incumbent Russ Feingold and re-elected in 2016, again defeating Feingold. Read more on Wikipedia

Since 2007, the English Wikipedia page of Ron Johnson has received more than 45,739 page views. His biography is available in 20 different languages on Wikipedia making him the 10,356th most popular politician.

Among politicians, Ron Johnson ranks 10,303 out of 14,801. Before him are Rickard Sandler, Syama Prasad Mukherjee, Ernst Ludwig I, Duke of Saxe-Meiningen, Willem Schermerhorn, Iziaslav III of Kiev, and Thanin Kraivichien. After him are Petar Živković, Lascăr Catargiu, Creoda of Mercia, Hunald I, Pavlos, Crown Prince of Greece, and Vasil Mzhavanadze.